Went to the Mandarin as I told you and had a great lunch, as usual. Started with a bowl of hot and sour soup which was hotter than usual and delicious. Alex J. Cavenaugh tells me it's easy to make so maybe I should get off my duff and make it. Much to our surprise, the place was crowded. Turned out they had several large parties. I guess I chose the wrong day. The first time I went up I couldn't get near the Chinese food so I ended up getting sushi and some dumplings for starters. They also had some things that looked like Crab Rangoon which they called seafood casserole, I think. They were pretty good anyway.  I think I managed to sample all the things that were on special for the moon festival. There were a couple of dishes with lotus root, one was stir fried, the other was tempura. Both delicious. Of course I finished off with both Crème Caramel and some Moon Cake. Quite a few pieces actually. I guess you could now say my birthday celebrations are over.

Because they are pulling out all the tiling in our building, and because the noise is so really, really, 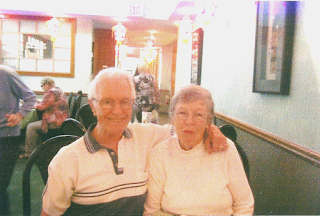 bad, we decided, instead of going home, to go bowling instead. My first game was good again, second ones not so good, but hopefully it helped use up some of those calories I consumed at the restaurant. Our bill, by the way, came to $16 as mine was free. The waiter took a photo of us, bit orange looking so I want to see if I can do anything with it before I post it. Looks a bit better, only problem was I was munching on a fortune cookie. They were so busy I didn't even get a little dessert with a candle in it. Our waiter asked if I wanted him to sing, I said no thank you. We could hardly understand what he said anyway, Happy Birthday would probably have been terrible. His name was Dracon which immediately made me think of our dear Father Dragon. Then we decided to go get some bananas as Matt had forgotten them this morning. Turned out to be very expensive bananas as there were a few other items I wanted to buy.

Supper was very light, home made tomato soup and crackers. Followed by pineapple spears and a few grapes. Pineapple was yummy.

I had to post a recipe for Hot and Sour Soup. As you can see, there are a lot of ingredients.

About this recipe
"This is my family's very favorite soup! It tastes just like take-out! It's quick and easy. I have been making it for years. Have a cold? Forget that plain old chicken soup! ***IMPORTANT TIP*** I suggest making this soup a day or two ahead to let the vegetables and tofu marinate! Then just heat and serve. Enjoy!"