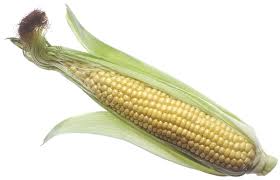 We both went grocery shopping after bowling on Tuesday. As I have said before, Matt usually does it at 7 a.m. on Wednesday, but he has decided to take the car in for service on Wed. morning so not enough time so, for once, I got go. I saw some local corn on the cob so bought myself a couple, Matt not interested so probably wouldn't think of it. I cook my corn, in it's husk, in the microwave, 6 mins per cob, I do them individually so one is cooking whilst I am stuffing myself with the first one. I then cut off the stalk and shake it, holding the silk end, and lo and behold everything comes off at once. Actually worked for me this time once I'd loosened the leaves a bit. What I was going to say though, was I became annoyed with people shucking the corn in the store, deciding they didn't want  it and just leaving it lying there. Corn is such delicate stuff and once picked it deteriorates quite quickly enough without shucking it like that. I guess the store must end up with a lot of shucked corn. I wonder if they would sell it at a discount?  Not that I would know what to do with it anyway, two is enough for me. I guess I could freeze it, But that probably wouldn't be much good unless I could flash freeze it. Maybe they just sell it for animal feed or something. By the way, I don't put anything on my corn, not butter, not salt, nothing and it is delicious. About the only time Matt will eat corn is if it is cooked on a barbecue and then it has to be done properly. In the States we could buy Birds Eye frozen corn which is, of course, flash frozen, which we would soak in water for a while and then barbecue. Deeelicious. Birds Eye is not in this part of Canada unfortunately. With fresh corn, you can soak the whole cob, leaves on, a fairly long time and then cook it in its leaves. You can remove the leaves too to get them like the pic above. Not as good unfortunately but OK. I have just eaten corn for my afternoon snack, but I could make a mess of those in the picture. 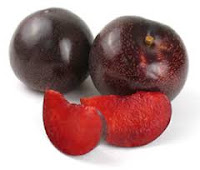 Whilst doing the shopping, I came across a fruit I had never heard of before, a Plumcot. As the name implies it is a cross between a plum and an apricot. I decided to buy one to try. It better be good, it cost $1.41 - for one fruit. They are about the size of a peach - a lot bigger than the average plum. Just reminded me of a blogger from South Africa, Ben Trovato, that I read. He was complaining that he had bought some cherries and then suddenly discovered he had paid R 35.99 for 15 cherries. That's $3,35. They were also from England and as he said, SSA have their own cherry trees, acres of them. A lot of money for 15 cherries - I agree.

I was delighted to discover that Michael Hicks' last book in the In Her Name series, called Mistress of  the Ages, is now available. This series is an alien contact story with a difference. Excellent series in sets of three. Each of the three sets has a first book which is a free ebook. I really don't remember how I found them originally, but I have been waiting for this last one forever, or it seems like. I may have to do a re-read of the first two in this section just to refresh myself. The beginning book is called First Contact and is actually pretty frightening. This is the blurb on his website: The Terran survey ship Aurora makes a startling discovery in an uncharted star system: two planets inhabited by an advanced, and decidedly unfriendly, non-human civilization. Disabled by gigantic alien warships before it can escape, the Aurora is boarded by nightmarish blue-skinned warriors with claws and fangs who slaughter the crew in ritual combat using primitive weapons. The sole survivor, Midshipman Ichiro Sato, is returned to Earth as a messenger bearing a device that warns of humanity's impending doom...

This is a recipe from Giada de Laurentiis at FoodNetwork.com and is perfect for Vegans I think. Mind you at this time of year th asparagus won't be so good, but not everyone is as particular about it as I am. I would probably use pecans too. I don't know where Giada gets her walnuts, but after English walnuts I find the ones I can get here are somewhat bitter.

1. Bring a large pot of salted water to a boil. Add the farfalle and cook until al dente, stirring occasionally, about 12 minutes. Drain, reserving 1 cup of pasta water.
2. Meanwhile, melt the butter in a heavy large skillet over medium heat. Add the mushrooms and saute until tender and most of the juices have evaporated, about 5 minutes. Add the asparagus and saute until the asparagus is crisp-tender, about 5 minutes. Add the farfalle. Stir in the mascarpone and nutmeg and toss until the cheese coats the pasta, adding the reserved cooking liquid 1/4 cup at a time to moisten. Stir in 1/2 cup of walnuts. Season the pasta, to taste, with salt and pepper. Mound the pasta in a large bowl. Sprinkle with the Parmesan and remaining 1/4 cup of walnuts. Serve.

Email ThisBlogThis!Share to TwitterShare to FacebookShare to Pinterest
Labels: Cherries, Corn on the Cob., Creamy Farfalle with Cremini Asparagus and Walnuts. Plumcot