I went to exercise class today, Monday, not having made it last week because of my back, sciatica, whatever. This week I need to go 3 times as there is no bowling and next Monday is a holiday so no exercise class. I did OK n the class but my back has been giving me hell ever since.

Then we went to the asparagus farm. No, not for asparagus, for honey. I was nearly out so we headed over there. Whilst there I got a punnet of blueberries which hopefully Matt will enjoy. He has been saying the blueberries he has tried lately are tasteless. I got myself some sweet corn too. Just two cobs as Matt doesn't eat it. Instead of my usual afternoon snack, I ate my corn, deeeelicious. I would love to eat more of it, but I don't want to put back the weight I lost and I could easily do this. I did NOT use butter - to me they taste delicious without. Talking of corn, have you tried microwaving it? I leave it in it's husk and nuke it for 4 minutes. Then removing it wearing an oven glove I cut off the end where the stalk is. Technically they say you can then just hold the end with the silk, shake it and everything comes off clean, never worked for me, but if you hold onto the silk at the end and then shuck the leaves, the silk comes off with the leaves. OK, in the picture I didn't do it that way, but I did on Monday.

Because my back was killing me we had a simple supper of devilled eggs and salad. I have mentioned before that I use English Mustard to make my eggs. The classic mustard is Colman's although it is marketed as Keene's in Canada. In England it is mixed into a paste and often eaten with roast beef or ham. A restaurateur we used to know always boasted he was so busy he had 6 men in the cellar making Colman's mustard. We used to always serve champagne cocktails, a good ham and Colman's mustard on Christmas morning. People tended to assume that the mustard was the same as the wimpy stuff found on this continent, we would warn them, but they took no notice and it would make us laugh to see the pain on their faces and the tears coming out of their eyes. We did warn them first. We tried to start this tradition in Canada but it never worked for various reasons. Pity.

I love chilled soups in the summer and this is a very unusual sound recipe. I found it in Food & Wine who send me a regular email. 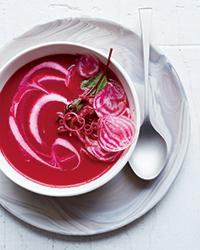 Make Ahead
The soup can be refrigerated for up to 3 days.