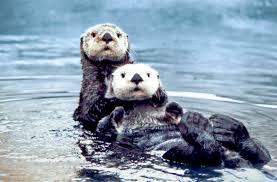 For the last three days Matt and I have been watching a TV programme on public television called Big Blue Live. Absolutely wonderful.  They brought us live shots of all kinds of marine life, because these animals are all congregating in the Monterey Bay area off the California coast. This area is full of food and this year there is more food available to the sea animals than usual - sorry, all the science did not stay in my head. If you go to this link you will see some of the fabulous shots they managed to get or were even sent in to them. There were superb shots of breaching humpback whales, lots of them surrounding the boat on which they were taking photos. Then yesterday there was the fascinating scene of 3 or 4 Killer Whales turning up and from the helicopter overhead you 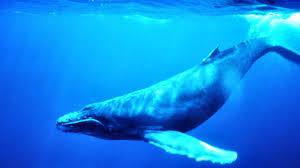 could see the dolphins streaking away from danger, literally thousands of them. Then some humpback whales seemed to gang up on the Orcas to drive them away. There were lots of shots of the adorable sea otters, and many of the seals resting on land or flying through the waters. Shots of one bird which flies from New Zealand does a tremendous journey around the Pacific and ends up in Monterey Bay - in its total life it apparently flies the same distance as travelling to the moon and back, twice. And finally, tonight, we saw live pictures of a Big Blue Whale cruising into the area. They are the biggest animal that has ever lived on earth and there is a record of one really large female who was bigger than any dinosaur ever. Mostly they clock in about 100 ft. long. Can you tell how excited I was to see this show. I have long been interesting in the Monterey Bay Aquarium where they do such wonderful work with sea life. They also produce lists on a regular basis of what fish is currently sustainable and therefore a good choice for the table. Oops, I forgot the Great White Shark who visited too. There was a diver swimming with him and he couldn't have been less interested. However, we saw lots of pictures of bite marks on various animals that were there.

Having checked with the alley, there is no likelihood of bowling this week but we can bowl again on Tuesday (Monday being Labour Day and no doubt super busy). The Winter League is still a week and a half away. Starting on the 14th.

This looked like a good recipe for shrimp although if I served it with the shells on Matt wouldn't eat it, I wouldn't want to either. I don't see the point. However, your choice. 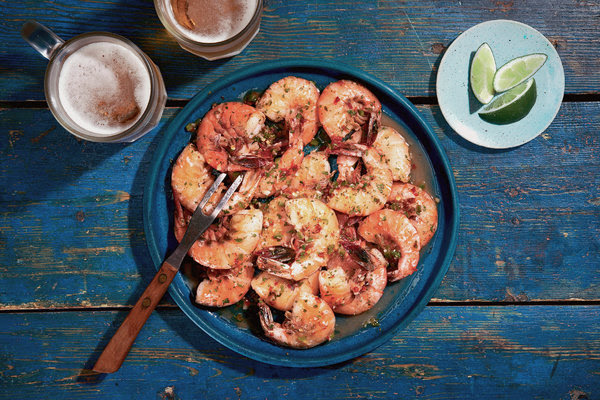 This is a dinner to evoke deep summer, when the heat lies heavy even at dusk and humidity wraps you like a blanket: shrimp tossed in garlic butter made fiery with Indonesian sambal and jalapeño, cut by lime, fragrant with cilantro. It is a kind of scampi for the sun-kissed and sun-desirous alike, a vacation on a plate. Add a mojito and a couple of beers. The recipe comes out of southwest Florida, from Doc Ford’s Sanibel Rum Bar and Grille, a restaurant that sits off the road that runs slow and sultry along Sanibel Island toward Captiva, past the placid, russet waters of Tarpon Bay. Randy Wayne White, one of the owners, named the place after the fictional protagonist of his mystery novels. The air smells of salt and mangrove there, of tropical rot and fresh-cut grass. He graciously sent along a recipe, which we adapted for use at home, in 2010.