Being unable to sleep for some reason, decided to do a bit of blogging. Of course we are heading out a bit later on and will be in Winchester, VA this evening and in North Carolina tomorrow.

Just read an article which I thought was quite funny, Mars are saying that deep fried Mars Bars are unhealthy – um, did anyone think they were healthy?  There is a place called Carron Fish Bar who invented the deep fried Mars Bar and were thinking of applying for a protection status but Mars say that as they have been reducing the sat fat content of the candy bar, they could not support such application as it negates their reduction of sat fat!! I cannot imagine eating such a thing in the first place, but I really think this is somewhat silly. Much to my surprise they sell something like 100-150 of them a week – mostly to visitors.

A couple of friends popped over yesterday, basically to collect some Avon she had ordered. However, we gave them some supper and had a fun time with them. I just did a quiche and salad followed by a fruit salad and cream. I had chopped up fruit and poured on champagne which made a pretty good dessert with a dollop of English cream.

We are going to the south so I immediately start thinking of shrimp and a big favourite dahn sahth these days is Shrimp and Grits.  Here is Paula Deen’s take on the recipe and you can’t get much more southern than Paula Deen.

Here it is, y’all! Martha’s beloved shrimp and grits recipe! If you have everything chopped and measured before you start cooking, it takes only about fifteen minutes to prepare. It’s perfect as a one-dish meal for family.–Paula Deen 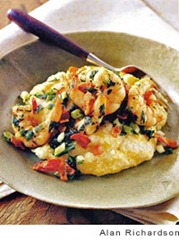 1 pound shrimp, peeled and deveined, left whole if small and roughly chopped if medium or large

1. To make the shrimp and grits recipe, bring 4 cups water to a boil in a medium saucepan. Add the grits and salt and pepper to taste. Stir well with a whisk. Reduce the heat to the lowest possible setting and cook the grits until all the water is absorbed, about 10 to 15 minutes. Remove from the heat and stir in the butter and cheese. Keep covered until ready to serve.

2. Rinse the shrimp and pat dry. Fry the bacon in a large skillet until browned and crisp, then drain on a paper towel. Add the shrimp to the bacon grease in the skillet and sauté over medium heat just until they turn pink, about 3 minutes. Do not overcook! Immediately add the lemon juice, parsley, green onions, and garlic. Remove the skillet from the heat.

3. Pour the grits into a serving bowl. Pour the shrimp mixture over the grits. Garnish with the bacon bits.

Note: If you are serving this as an appetizer, spoon 1/4 cup grits onto a bread or salad plate. Top with 1/4 cup of the shrimp mixture. Garnish with a sprinkling of crisp bacon bits and serve immediately.