Sorry didn’t post a blog earlier, but didn’t get home til pretty late last night and spent most of the day celebrating in one way or the other. After all, its not often one reaches 40 years of marriage. 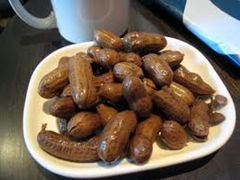 The first thing that happened yesterday, the young woman who is a receptionist at our doctor’s turned up to collect the things I brought her from North Carolina which were boiled peanuts and grits. Think I mentioned Matt tried boiled peanuts for the first time ever last weekend and thought they were the most disgusting thing he had ever put in his mouth. Funny. Not my favourite thing to eat, but certainly not that bad. The receptionist hails from Georgia so was almost born and bred eating them. I was concerned about how they would travel, hope they were alright, guess I will find out, going to the doc on Friday and she will be working that day she says.

Then, as our apartment was freezing, well I was, the apartment wasn’t helping. Called in the super (actually he is the assistant, we don’t have a super at the moment as our last one left in a bang the day we left for NC) he says the zone valve, whatever that is, isn’t opening properly so has to call in a repair man. So I carried on freezing. Shortly after the Rogers Cable guy came in to change our ‘box’ which had been causing the TV to freeze and pixillate. By this time we were sitting drinking champagne (for me) and beer (for Matt who isn’t that keen on the bubbly). Matt was worried the cable guy would think we were alcoholics so we had to explain what it was about.

out. Went to our friend’s home in Cambridge and had a quick glass of wine before we went to the restaurant. As you will see, I was originally worried about the steps, but in fact they have wheel chair access (no I don’t have one) and an elevator round the back to the left. We were shown into a private room and were staggered to discover not a couple of friends but 6 people waiting for us. It was so nice to see all of them and that they had joined us for our celebration which one friend had thought was 25 not 40 years. She has been teased unmercifully for this. We chatted for a while and had an excellent waitress who was prepared to do whatever we required. Eventually we ordered and Matt chose a calamari dish which surprised me, I have never known him eat calamari. It was served in a tagine which was most impressive, especially when three were brought in at once. I had a parsnip and pear soup which was delicious. Matt then chose a chicken breast dish which is not shown on the menu with soft egg potatoes. Difficult to describe, but they came 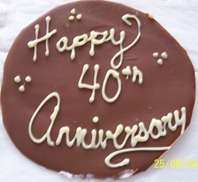 with quail eggs. I had boneless rack of lamb over white beans and ordered a side of golden beets which were also delicious. I would mention that there was a decent pause between courses, they were not slammed down in front of you almost before you had finished your current course. Eventually the most gorgeous looking carrot cake decorated with all kinds of fruits, strawberries, raspberries, blackberries etc. etc., was brought in with a large chocolate disk perched on top. Of course I didn’t have a camera. Several people did and I am hoping to get some pictures. I have the chocolate disk at home as well as the remaining chunk of cake (about 2 servings). We were also all given a glass of champagne, courtesy of the management which I thought was very nice of them.

I nearly forgot to mention that the cake was the gift of one couple of friends, the others all gave us wonderful certificates for local restaurants which we will certainly enjoy over the next month or two.

I want to get this posted, so hopefully I will have some pictures to share tomorrow.

To me, dumplings are such an English thing to make and eat. I can remember many meals my mother made which included dumplings and I have made a few myself over the years. Traditionally dumplings were made with suet, but in many places this is not available any more plus it isn’t the healthiest option in the world!!