Very sad news yesterday – the death of Andy Williams. It was especially poignant to us having celebrated our anniversary this week as we fell in love dancing to the sounds of Andy Williams many years ago. I think we had all his LPs (which have since been transferred to CDs) and used to know the words to all his songs. I guess, to us at least, it’s the passing of an era. This picture is how I remember him at that time, it was taken in 1969 which is about when Matt and I got to know each other. Never really saw any of his shows until we came to Canada.

My friend sent me copies of the photos she took at our anniversary dinner on Tuesday night, here are a couple for you to see. 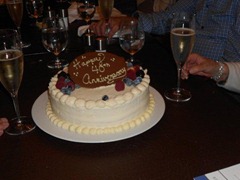 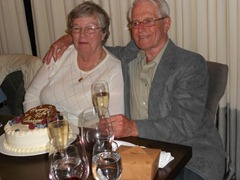 As I mentioned yesterday, that was a carrot cake and very delicious too. We had our glasses of bubbly on hand as well. Thanks to my friend for both taking and sending me the pictures. There were several more, but I don’t publish pictures without the subject’s permission. Of course one picture we didn’t get was that of the camera man, camera woman I should say. We finished the cake for dessert on Wednesday night and I broke off a small piece of the chocolate disk to try. Good chocolate!!!!

Something I forgot to mention, the last evening in our cottage in NC, I was cooking

eggs and had broken several into a bowl. I just happened to have a plastic water bottle handy so, at long last, I tried lifting a yolk out of the bowl using the bottle. Guess what, it works. I was thrilled to bits. First time I have ever had a chance to try it. If you don’t remember the video its in my blog here. It really is so easy to do. I kind of didn’t believe it although friends who have tried it said it worked well.

Another interesting looking dessert to be tried in the near future.

By The Sprouted Kitchen
WebMD Recipe from Foodily.com

The first time I made this recipe I wasn’t sure I’d like them. Out of the oven they 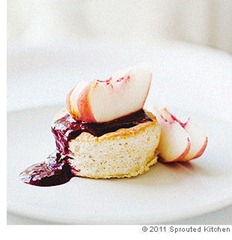 looked like ginger egg souffles, but looks can be deceiving. What came out was a zesty ginger angel food cake of sorts, with the tang of fresh blackberries and the warm sweetness of a ripe, white peach. It’s not that any of the three components are show stoppers on their own, but together, the combination is absolute perfection. This dessert is a case in point that heavy and rich is not always better. If I were serving this to other people, I would consider adding a very small scoop of good vanilla bean ice cream on top. However, for the sunny days of August, where it is just me and Hugh needing an afternoon treat, they are perfect as is.

Egg whites are easier to beat when they sit at room temperature for a bit. As far as substitutes, you could use regular white sugar instead of what is listed above if that is what you bake with, and have on hand. I imagine they could be made gluten free with rice flour or a gluten-free baking mix, but I haven’t tested that myself. I like a lot of ginger, and found the above measurement to be pretty modest. If you make them, I’d love to hear your feedback on the ratio!