Sunday night I watched Alice and Wonderland, the Johnny Depp version. Wasn’t sure about it, but I thoroughly enjoyed it. It wasn’t a true version of the story, but nevertheless contained many of the characters. Johnny Depp was the Mad Hatter who had a much bigger role than he does in the book. I particularly loved the Cheshire Cat, they really did a good job with it. Much better movie than I expected, I was quite prepared to turn off the TV. Mind you it was on a channel with ads which did not add to the enjoyment. I hadn’t really noticed before, but he’s not a bad looking guy. Alice as a child was a real beauty, but as a grown up she fell somewhat short I felt. Pity.

help pay for the clean up of Canadian and American shores caused by the tsunami early last year. Really, that’s very good of them – I know its their junk, but it wasn’t exactly their fault. There is a large build up of debris accumulating on our shores and the Canadians already sank a Japanese fishing vessel which was unclaimed. Its going to be a very expensive proposition to clean it all up and the clean up on their own lands must have cost/be costing a hell of a lot of money.

On Facebook there is often a lot of ‘Grammarly’ comment such as emphasizing the use of their and they’re as well as other similar sounding words, but something that has been bugging me lately is the pronunciation of words by adding an extra letter such as realty being said as realaty and remnants as remanants. Some people seem to have terrific trouble saying a word with two consonants when really its easy ‘real ty’ and ‘rem nants’. I recently heard remanants on a TV weather report talking about  Hurricane Isaac and I wanted to grab the speaker and shake her and I notice even people who work for realtors tend to say realator. I don’t refer to it, but boy would I like to.

As you know, I like quinoa very much, so I thought this recipe sounded pretty good. Not yet had a chance to try it. I didn’t know what pepitas are, they are apparently the edible seeds of a pumpkin. I would imagine they would be very crunchy once toasted. In case you are not sure how to toast them, sauté them lightly in a dry non stick fry pan. Same with nuts.

Cilantro, lime and scallions lend a bright finish to delicate quinoa. This versatile side pairs well with seafood, poultry or pork. 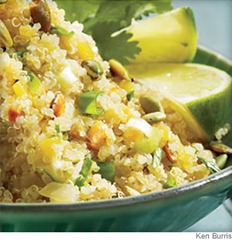