We went to Floyds 1921 for my birthday dinner and both Matt and I chose the soup of the day, which was potato, beer and cheese – delicious. This was followed up by trigger fish with a scallop and grape sauce over rice with asparagus. Delicious but turned out to be somewhat pricey. I finished off with a special crème brulée which was free as it was my special day. Matt had a New York cheesecake with a honey crust. Excellent food. If you check out their web site you can see the menus. It was great to have dinner with friends, some we hadn’t seen yet this trip. They gave me lots of small gifts which were well received.

On a serious note, the reaction by the Muslim extremists to the inflammatory movie criticising Mohammed made by an Israeli in California is pretty horrifying. I think the filmmaker should be charged with murder and jailed, what a damn stupid thing to do although one hears that he did it on purpose to inflame.  What a fool of a man, there have been a number of deaths, both American and protesters including the ambassador. I hope he feels pleased with himself.

Then there is the scandal about the French photographer who photographed the Duchess of Cambridge running around topless in a private French home. The French have published the pictures and now we hear the Palace are planning to sue. Way to go. 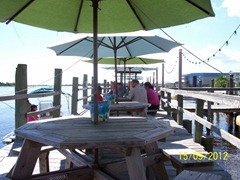 pier where you can lunch or have a beer at weekends. We checked out their menu but having had lunch we just had a beer, but I spotted She Crab Soup; ordered some to go, we had it for supper that night. Absolutely delicious.
This is the restaurant 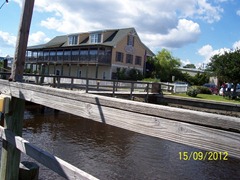 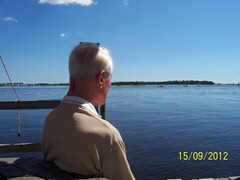 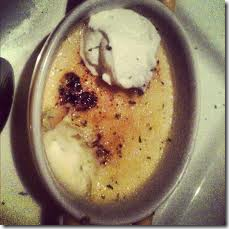 Preheat oven to 325F.
Combine milk, sugar, and half-and-half in a small, heavy saucepan. Heat mixture over medium heat to 180 degrees F or until tiny bubbles form around edge (do not boil), stirring occasionally. Remove from heat.
Combine lime juice, egg yolks, and egg in a medium bowl, stirring well with a whisk. Gradually add the hot milk mixture to egg mixture,
stirring constantly with a whisk.
Divide the mixture evenly among 6 (4-ounce) ramekins or custard cups.
Place ramekins in a 13 x 9-inch baking pan, and add hot water to pan to a depth of 1 inch. Bake at 325°F for 30 minutes or until center barely moves when the ramekin is touched. Remove ramekins from pan, and cool completely on a wire rack. Cover and chill 4 hours to overnight.
Carefully sift 1 1/2 teaspoons sugar over each custard. Holding a
kitchen blowtorch about 2 inches from the top of each custard, heat the sugar, moving the torch back and forth, until the sugar is completely melted and caramelized (about 1 minute). Serve the custards immediately.
Makes 6 servings