Happy Cinco de Mayo to everyone. 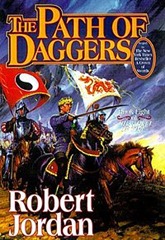 book from my library – I am re-reading Robert Jordan’s Wheel of Time series, and wanted The Path of Daggers. It turned out that it has been late for a month and there is no way they will borrow the book for me. I then decided to go to Amazon. com and see what they had and bought the book for 7¢ – no that isn’t a mistype. Shipping costs about $5 so I ordered the book straight away and am expecting it any day now. 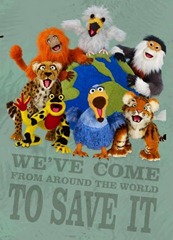 Today on GMA Sam Champion was in Philadelphia at the zoo where they are running an exhibit called X-Tink-Shun. They have films and performances with puppets as wildlife which is either extinct or in danger including Didi the Dodo. That made me think, how often one says “dead as a dodo” without thinking what that really means – the dodo has been extinct for 300 years. To read more about this go to http://www.xtinkshun.org/ – I wish I lived in Philly. On the web site there are a series of animal pictures which you can click on to read more about each endangered species.

I finally get to see my foot nurse today, she was as sick as a dog a couple of weeks ago and then when she was better, we couldn’t find a suitable time. One thing about having diabetes, one needs to take care of the feet. Extremities are important, the hands one can see easily, but feet are a long way away. I also discovered a new point of view from the medical community. They think gastric bypass surgery will lower sugar levels and reduce diabetes even immediately after by reducing the levels of certain amino acids. http://tinyurl.com/3nqga75 is the article and worth reading. I do know a friend who had a similar procedure, she was considered pre-diabetic and immediately after had no diabetes risk at all. I don’t think they would perform such surgery on me, I am too ancient I believe.

I am still crossing my fingers for the weather to improve so that the asparagus can grow and ripen. its been kind of sunny the last couple of days, but not exactly warm. I spoke to Tim Barrie at the asparagus farm and he said the plants were sprouting and that he had hoped to have some for Mother’s Day, but he isn’t sure right now. Please sun, do come out, I have waited fairly patiently for a whole year.

COOK bacon in large skillet until crisp. Remove bacon from skillet; drain on paper towels. Discard drippings from skillet. (Do not wash skillet.)

Asparagus spears snap off naturally where they are tough. Simply bend the spear near the bottom end and it will break off at the right point. Or, remove an inch or so of the "woody" portion off the bottom of the stalks with a sharp knife.