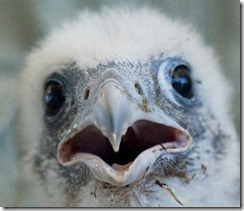 Toronto and how these Falcons are proliferating in Ontario. Apparently they have just banded four babies who were born 43 stories up on the Sheraton Tower. The babies (properly known as eyeasses) will be watched carefully once they begin to fledge, or fly, to help prevent the strong mortality rate (80%) which occurs among baby falcons. Volunteers will take part in a fledge watch about 40 days after their birth. If you would like to read the full article from The Sun go here http://tinyurl.com/3js657z where you will also find a link to a photo blog. There are, apparently, another couple of falcons awaiting the hatching of their first egg. Also in Toronto.

Yesterday, we had a lovely day!! In the first place we had to rush and shower because they were turning off the hot water early. Then Matt took the car in to find that a strut in the back had gone and therefore both should be replaced, they told us a couple of hours, it was finally around 5:30 p.m. before we got the car back, together with a hefty bill. So absolutely nothing was achieved. Do you realise I have been 4 days without any asparagus. Talking of which, I was horrified to discover an Australian friend of mine doesn’t like asparagus. Oh what she is missing. There is a pretty good description of asparagus in this blog which makes me drool right now http://smotheredinbutter.blogspot.com/ look for the one called Aaaahsparagus!

Lots of dreadful pictures being shown from Joplin, Missouri which is bracing for, possibly, another tornado, meanwhile several more ripped through Oklahoma today.  Apparently President Obama is planning to visit there over the weekend when he comes back from his European trip. I’m not sure what good that will do, but I guess it shows he cares?

Amongst the many newsletters I get in my inbox is one from the BBC (Aunty BBC as we used to call it) with all kinds of interesting recipes. This vegetarian curry appealed to me. Because we were once very prominent in India (part of the British Empire) curry became a very popular dish in the UK and these days, due to the influx of Indian peoples into Britain, curry is, I’m told, more available than the proverbial fish and chips. For the people on this side of the pond, Aubergine is eggplant.

This delicious vegetarian curry is packed full of flavour and is ready in less than 30 minutes.