Is it because they are film stars or politicians, but now Arnold Schwarzenegger has admitted to a mistress and an illegitimate child. Silly man, especially as his wife is a member of the Kennedy family and therefore well connected. Why are these men such fools and end up ruining their careers whether it be political or otherwise? I suppose they think they will never be found out. Look what happened to John Edwards, he has faded into nothingness although I guess Arnold always has his film career to fall back on. Hollywood makes capital out of such publicity. They listed a whole bunch more well known men on GA this morning.

We had an irritating day yesterday, when I tried to dial 911 the other night our cordless phone wouldn’t dial it. I ended up using another phone. However, I phoned GE and it turned out that every number I pressed had to be pressed twice before it registered. Heaven knows why. I had always used speed dial on that phone so never noticed. GE no longer make cordless phones. So then we go to Staples and pick up an inexpensive phone which, it turned out, 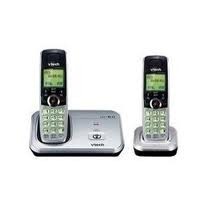 didn’t allow speed dial. No good, Matt would never figure out how to get at the address book on the phone. Took it back and discovered that none of the cordless phones had a speed dial feature. Got our money back. Decided to go to Zellers and asked them about speed dial there, they assured me none of the phones had it. We ended up buying one anyway. Guess what, I was browsing the manual later and there is a speed dial feature for 10 numbers. Now how come the assistants don’t know that? We ended up with a Vtech which has quite a few other features – it can be expanded to take extra phones or something,  but obviously we don’t need more than one. So,  now it is charged I spent some more frustrating time trying to figure out the instructions in the manual to enter speed dials. Whoever writes these instructions is insufficiently explicit. 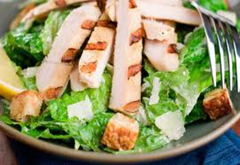 at the Moon and had supper there. Not a bad deal, not gourmet cuisine you understand, but good food, plenty of it. I had soup (potato and bacon) and then we both ended up with Chicken Caesar Salads, a small one for me, a full size for Matt. There was a lot of chicken on the salad.

I thought this cake looked easy and rather interesting. You can’t really go wrong with lemon flavours. 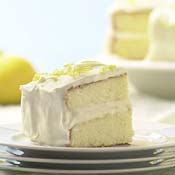 3. Bake cakes until tester inserted into center comes out clean, about 25 minutes. Cool cakes in pans on racks.

5. Using electric stand mixer and whisk attachment, beat cream cheese and butter in large bowl until light and fluffy. Gradually beat in sugar, scraping down sides of bowl occasionally. Beat in zest, vanilla and lemon oil until mixture is smooth and fluffy, about 4 minutes.

9. Cake can be made 1 day ahead. Cover with cake dome; refrigerate. Let stand at room temperature 2 hours before serving.

Author Notes
This cake is lemony inside and out. The combination of frozen lemonade concentrate and fresh lemon zest give this cake a zingy flavor.