I was reading a blog writer’s article the other day and he was reminiscing nostalgically about his childhood. I thought about it quite a bit since and I really don’t remember much about my childhood although lots of people used to think I had an exciting life because some time after the age of 8 I lived on a boat. Shortly after I was born in the Manchester, England area, a long time ago, the Second World War started and about the only thing I remember of the war was my father coming home from Rhodesia where he had been training air force pilots, and my mother making me to sleep under the stairs as it was supposed to be a safe place if bombs fell. I have never really found out if that truly was safe. I had a nanny before the war, but don’t remember her. She was drafted and my mother swore she stole her watch when she left; I do remember her name was Dorine. Meanwhile my mother was co-opted to drive a jeep at the local airfield, either ferrying VIPs or towing airplanes. By this time I guess I was old enough not to need constant minding. I do remember being with her at the airfield once or twice. Because she had a kid, me, she obviously couldn’t be drafted. A lot of women had to work in factories during the war which was something they had never done before. I guess my mother was lucky, her job was much more fun I think.

After the war I only remember snatches of things that happened. I can recall playing with other kids and rolling in the grass and cutting myself badly on a piece of glass. Had to be rushed to the hospital. Taking stew in a little brown pot for my lunch comes to mind, I guess the school would heat it for me. I actually went to eight different schools because my father moved around with his job so much and before he was demobbed he was posted to various airfields around the country and we went along too. I can remember hanging out of bedroom windows in farm buildings watching the cows being brought in for milking. I was allowed to try milking once, don’t thin 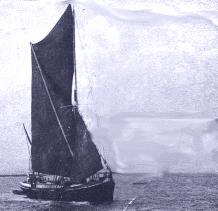 k I was much good at it. Eventually my father was posted to Kent in the South East of England where he bought a lovely Georgian house in Rochester, of Dickensian fame. A year or two later he sold that to buy a converted Thames Barge and my life afloat began. I have written lots about that

One thing I have been wondering about lately, will face lifts and plastic surgery every become available to one and all, i.e. those who don’t have lots of money to pay for it?  I occasionally look at my face and think I need a little something. However, I know a friend had some work done on her eyes and it cost something like $15,000 – I thought she was nuts at the time, especially since I couldn’t see any difference although I expect she could when she looked in the mirror.

Matt took sausages out of the freezer for supper yesterday and the thought of plain fried sausages did not appeal, so I hunted on the net and found the following recipe which was delicious. It calls for spicy sausages so as mine were not spicy I added some pepper flakes to ginger it up a bit. 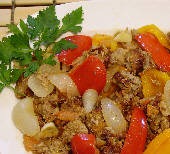 The choice of peppers is yours, but unless the sausage is extremely mild, red bell peppers are always a good choice. For mild sausage, try Greek pepperoncini or other mildly hot pepper. In this recipe, I used our local handmade sausage (loukaniko) which has enough spice to make my eyes water, so I chose one red and one orange (sweeter) bell pepper. Note: This is delicious on the second day as well!

In a heavy-bottomed frying pan or skillet, sauté the onion in the olive oil over medium heat until translucent, about 5-8 minutes stirring constantly with a wooden spoon. Add sausage, peppers, chopped tomato and juice, and garlic, and stir until all ingredients are well mixed. Stir in wine and cover. Cook for 20-25 minutes, stirring occasionally.

Spoon onto serving plates and serve warm. A favorite with rice.

Preparation note: If using pepperoncini peppers (mildly hot), they can be used whole as long as the sausage isn't extremely spicy. Otherwise, slit the pepper open and remove the seeds before adding to the dish.