An interesting point was made, yesterday, in Blogging without a Blog http://bloggingwithoutablog.com/blogging-sheeple/ about whether people tamed down their writing because of the possibility of adverse comments. Of course the most controversial topics would be politics and religion, but as I stated in my comment, I don’t get passionate about either, so its not something I would write about anyway. Yes, I wrote about the defeat of the Liberals yesterday, but I was only stating what had happened. Mainly, I just write what I think at the time of writing (I could change my opinion over the years of course it happens). The only things I am really passionate about (if you can call it that) are animal cruelty and food. Generally these topics don’t produce criticism. Maybe I should write about more controversial topics, perhaps I would get more comments. However, some of my blogging friends get the weirdest things written in their comment sections, I really don’t want to attract such nonsense.

On yesterday’s GMA they ran a segment about the 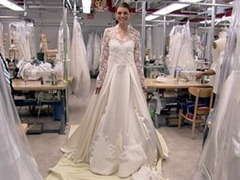 copies of Kate Middleton’s wedding dress. There is a video if you wish to watch it, but they ‘knock off” dress, made by one of the top US wedding dress stores sells for a cook $3,700 just right for any bride!!! They did say that the average wedding dress is about $3,500. I’m sorry but to pay that kind of money for a dress you wear once and once only, is, in my opinion, absolutely stupid. You can find lovely dresses for much, much less money. In the video segment the model is totally dressed in the full regalia including a tiara. One interesting note, to get the lace the exact colour, they used a tea bag!!! Tea-dyed lace. As for the two princes, I finally found out what their uniforms were, Prince 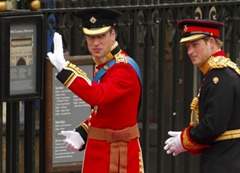 William is an honorary colonel of the Irish Guards so that’s what he wore to the great disappointment of the RAF of which he is a serving officer although his jacket would not have been so spectacular. As for Harry, he wore the dress of the Blues and Royals or the Royal Horse Guards 1st Batallion. His appearance impressed me more, I loved all the gold bullion on his jacket. If you are interested, there is an article here http://tinyurl.com/6bbrn2a

Something I forgot to mention about the elections, apparently in Canada we have a Radical Marijuana party. I only know that because Matt had stickers for all the parties in case their representatives came to scrutinise. I didn’t know we had such a thing in Canada, we also have the Pirate Party, they are something to do with banning all pirating of music and movies etc..

Cinco do Mayo is coming up (May 5th if your Spanish isn’t too good) which is a Mexican celebration. With the result that my inbox is being inundated by Mexican recipes. Here is one which didn’t sound bad, although these days I don’t eat very spicy (hot) stuff it tends to give me reflux problems.

Tangy, mildly spicy and tender, this chicken is delicious with black beans and salsa. 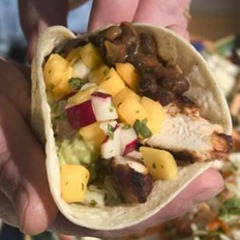 To oil a grill: Oil a folded paper towel, hold it with tongs and rub it over the rack. (Do not use cooking spray on a hot grill.) When grilling delicate foods like tofu and fish, it is helpful to spray the food with cooking spray.