I am pleased all my ‘slaving over a hot tin’ on Saturday went very well in the evening and we all had a fun time. One of my guests even brought me flowers for Mother’s Day, his mom is in Rumania so I became a surrogate. Well I am a step mother and step grandmother after all!!! I hope all of you who are Mother’s had a good day yesterday. As for dinner, for those interested we had English Stuffed Peppers, Flemish Beef Stew, Goat Cheese Potato Purée and finally Cookies and Cream. Everyone had seconds of the main course except me, I was way too full. The Beef Stew was originally published by me on February 3, 2010 and I can highly recommend it. We have eaten it a couple of times and really enjoyed it. I make it in my new slow cooker which I have only used twice. The Goat Cheese Potato Puree was published April 21, 2008. It is one of our favourites, loaded with cream, butter and goat cheese. Very healthy!!!

Funny really, Matt decided to phone his daughters yesterday to wish them Happy Mother’s Day. Both of us had forgotten that Mothering Sunday takes place in March in Britain. Duuh.

I have just discovered I have scintillating scotoma which is a symptom of migraine (silent migraine) and usually without the migraine itself. It was mentioned to me over the weekend and immediately rang a bell, I have been suffering from this, periodically, for a number of years. Usually I have to rest with my eyes closed for at least half an hour, maybe longer, and it finally goes away. I remember the first time it happened and it was pretty scary. No-one ever diagnosed the problem though and I have just been putting up with it for a good 12-15 years, I did mention it to my doctor and told her I thought it was migraine related, but she didn’t seem to have a clue. Another doctor thought it was to do with high blood pressure.

Last night I watched Notting Hill which I really loved,

I had seen it before, but couldn’t quite remember how it all went down. Julia Roberts and Hugh Grant who are two of my favourites. It’s a love story of course, but that’s right up my street. I think most women like a good love story, even if they don’t, I do. In case you are unfamiliar with the story, he is a, not very successful, book seller in Notting Hill with a somewhat odd room mate and a somewhat odd family too. She is a famous film star and whilst filming in London, happens to wander into his book store. From there the story develops.

By the way, our summer league at bowling starts today. Now we will be bowling once a week instead of twice.

The English Stuffed Peppers which we had for a starter on Saturday is a recipe we saw on a TV programme years ago, they were prepared by an English woman, hence the name I gave them. I don’t remember either her name, the programme or what she actually called the recipe. Unfortunately I forgot to take a picture. I don’t want to hear anyone saying “I don’t like anchovies” I promise you they will not be even remotely noticeable, they will blend in and just make the dish slightly salty. 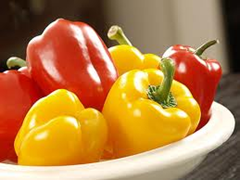 1. Cut peppers in half vertically and clean. Peel tomatoes and cut in to pieces. Stuff in to peppers. Snip one anchovy fillet per pepper half over tomatoes and add 4 slices of garlic to each pepper. Spoon olive oil over each pepper and roast for 1 hr in an oven preheated to 350°F. Serve with crusty bread.