It would appear from the information I am getting, that Dominique Strauss-Kahn has been behaving this way (sexual assault) for years but because it was basically in France, he has been getting away with it. You mean to tell me, rape is p

ermissable in France. Women are too scared of the adverse publicity to report it. The accusations of “she asked for it” because she wore short skirts, tight dresses, showed cleavage, etc. etc. are appalling. I cannot believe that in any country, in this day and age, women’s rights are so blatantly ignored. In the current case, the poor maid was forced to have oral sex with an old stranger. Prostitutes abound, why did he feel it necessary to assault a maid? With his money he could have had a really high priced call girl, or several, but no, he has to attack a poor woman working in the hotel. Now I am told he is planning to sue people who write about him??? Also, on the radio yesterday, it said he is on suicide watch. Matt, who used to work in the prison system, said he wonders if he (Strauss-Kahn) is trying it on. Later I read the cops are cutting squares out of the carpet for forensic evidence. I bet the Sofitel loves that.

Last night one of the two movie choices was The Dirty Dozen. I wasn’t going to watch it but kind of got caught. It really is a 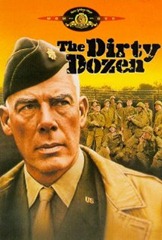 good movie with some very good acting by lots of well known actors. I love Telly Savalis as a religious killer of women. Donald Sutherland plays a slightly vacuous young man, Lee Marvin is their officer, then you have Charlie Bronson and Ernest Borgnine – oh and lots of others not so well known to me. If you have never seen it, Lee Marvin is told to interview 12 army prisoners in maximum security (several on death row) and persuade them to go on a dangerous mission behind enemy lines just before the invasion of Normandy.

This looks an interesting dish from Kraft Kitchens. Flank steak has become a much more popular meat than it used to be. 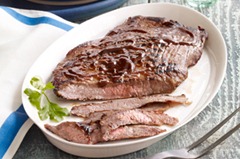 BRUSH steak with 2 Tbsp. steak sauce. Grill 16 to 18 min. or until medium doneness, turning after 8 min. Remove to carving board; tent with foil. Let stand 5 min.

MEANWHILE, mix remaining steak sauce with all remaining ingredients in saucepan. Bring to boil on high heat; simmer on medium-low heat 2 min. or until thickened.

CUT steak across the grain into thin slices. Serve topped with sauce.

Serve with a baked potato and steamed vegetable to round out the meal.

How to Grill Juicy Steaks

Use tongs to turn steaks on the grill when the bottom is well browned. Piercing with a fork will cause the juices to run out, resulting in a less juicy steak