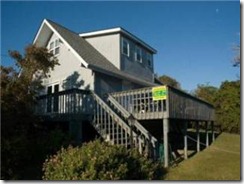 Happy Birthday to me, happy birthday to me. Well no-one else is around to say it, Matt is sound asleep!!!

Yesterday we had something of a shopping day, stocking up with groceries, etc. I think we bought the store. We came back and sat on the deck in the sun and had a couple of beers. Very pleasant. After lunch we decided to go look for a scanner and a face cloth,  mine turned out to be grungy. I thought I could buy a new one in a pharmacy, silly me. Finally found one in the linen dept. at Wal-Mart. I also found that some of the supplements I take – such as Co enzyme Q10 – are way cheaper in Wal-Mart here than at home. Wish I could really stock up. I also bought two very large turkey breasts on the bone for a little over $10. Thinking of getting another couple. Can’t get those at home at that price.

We then went to several stores to check on scanners. All I wanted was a plain old flatbed scanner, only found one at almost $100 although several people had scanner/printer/copiers – this included Wal-Mart, Staples and Best Buy. Ended up going back to Wal-mart and buying a Hewlett Packard Deskjet 2050 for $49 which is an incredible price. When I got it home, I discovered it needs a USB cable (to attach it to the computer), er, this is like selling a car without the keys. Guess I have to go back and buy a cable. I might also get some paper and then I can use it here if I want. There is actually a computer desk in the bedroom.

Tonight we are having a few people over for a barbecue. Unfortunately one couple who were going to stay here for a bit, are unable to come as she has major back problems at the moment. Not doing anything fancy, just pork chops, baked tatie and Caesar salad. At least two people have said they are making a cake so I might be somewhat overloaded with cake. Already had my birthday present from Matt, my computer. I had the laptop last year which was supposed to last me 10 years LOL.

I forgot to mention that our first night, we went to a local fish restaurant and both had flounder pan fried in butter. It was pretty good. All good for anti-angiogenesis. I bought a couple of artichokes too. Matt can’t be bothered with them, picking off each leaf individually, but I love them. There was, however, a time when I didn’t like them, when in France, I have regretted that occasion ever since and its ages ago, like 50 odd years *g*.

Talking of artichokes, I mostly like to eat them with a good vinaigrette as taught to me by a French woman around about the same time. All measurements are approximate.

1 tsp sugar (or a little more to taste)

Whisk it all up and enjoy on a salad or dipping your artichoke leaves.