We spend a lot of time here in North Carolina, but don’t say much about the place. Considering we lived here for 12 years I guess I don’t know as much as I should. This is a very historical area for the Americas and Beaufort (just up the road from us) is one of the oldest American towns. The third oldest in NC.

The whole of the mainland is sheltered by barrier islands which are a great help when there is a hurricane assisting in preventing floods. We are, of course, on the east coast although the coast should run north and south, it actually runs east to west. A lot of the islands are really dunes which are sown with sea oats in order to protect the sand from erosion. In fact the barrier islands stretch from New York State to around Jacksonville, Florida. 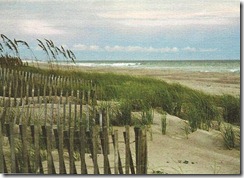 It is illegal to pick the sea oats but strangely it is not illegal to build on the dunes. There are several monstrosities built high up on the dunes here which I keep hoping a hurricane will knock down. In my opinion they should never have been allowed in the first place. There are several islands which have wild ponies on them. The rumour says they were left by the pirates, of which there used to be many, including the famous Blackbeard. Unfortunately they are very prone to equine diseases and have to be culled every so often to keep them healthy. The ponies can only drink seawater, so when they occasionally round them up and sell them, I am not sure what the new owners give them. In the picture you will notice an egret, these birds are numerous here, fortunately no longer hunted for their plumage to adorn women’s hats. Other birds which proliferate here are brown pelicans which you can see all along the coast. Occasionally one gets a glimpse of hunting Ospreys but they are not as numerous.

Because the islands are low and difficult to see, they are also home to a number of lighthouses, such as the one in the picture which is Cape Lookout. 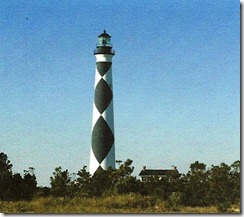 Most of them seem to be painted black and white but each with different patterns. There are, or were, seven active lighthouses on the North Carolina Coast. One of them at Cape Hatteras had to be moved a few years ago because of the erosion of the land and the danger of it falling into the sea. 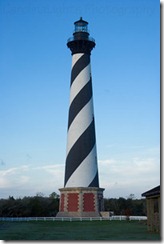 That was quite an undertaking as you can imagine and took months to move the structure a relatively short distance on a kind of dolley which was specially constructed and which ran on tracks like a train. We visited this particular lighthouse before they moved it. I couldn’t manage the climb beyond the first floor but Matt and the other friends (dad and kids) got to the top although their mother didn’t even try.

One thing about the Outer Banks, which is a specific area of the barrier islands, there are still descendents living there from the original settlers with names like Smith, Jones and Guthrie all of which came from the UK. I believe a lot of the Outer Bankers have now been moved because of the storms, and in some cases their homes were floated across the waters to a safer location. 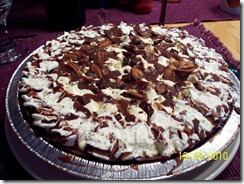 I had another birthday party yesterday. Went to some friends for the afternoon ending with supper. She has unfortunately been unwell and still is not better so I think it is courageous of her to have people in to dinner. Mind you, hubby did prepare most of it which helped. I think we ate and drank from 2:00 to 7:00 am without stop. We had shrimp, stuffed clams, cheese and crackers and then later salmon with rice and salad and finally a dessert turned up with a bunch of candles on it which I had to blow out of course. Luckily they didn’t have enough candles!!! It was chocolate, caramel and pecans, all good for diabetics, but delicious. I had trouble not having seconds. Just to add to the damage we had some Lindt chocolates, the round balls in different flavours, to finish off.

After all this, my sugars were very much up. I really must stop eating so much sweet stuff. Following that theme, here is a salad I picked up from a friend. I didn’t take a picture, but it was a very good salad.

1. Rinse and drain beans. Mix first 9 ingredients, put all vegetables in a dish and pour mixture over top. Let stand for a while to absorb flavours.