Rain, The Vine That Ate The South, Cell Phones, Shoes Which Lace Themselves, Hypnotic Gastric Bands

Yesterday, we awoke to rain, rain, and more rain. We left the hotel in Virginia around 9 – bit later than we attended thanks to a very slow waitress – and headed north and it rained and rained and rained. What a miserable day and miserable weather for driving. OK I do appreciate that some areas needed rain badly, I know Ontario does, but maybe the weather gods could have saved it for another day when we were not on the road. Particularly as so many drivers seem to assume that it is perfectly safe to drive as they always do in these dreadful conditions. We did see a couple of accidents, both times the vehicle had gone off the road and in one case was high up on a bank. Some people are such fools.

The Vine That Ate the South is one 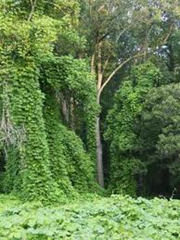 name given to kudzu which does, literally, appear to be eating the south and covering everything in sight. There are acres of the stuff and it is also called foot-a-night vine or mile-a-minute vine. Some places are worse than others, but this is a pretty typical picture. I didn’t know until I was just researching it, that it actually has quite a pretty flower and must look most attractive in the spring or whenever it blossoms. http://en.wikipedia.org/wiki/Kudzu

Cell phones – I am surprised that there doesn’t seem to be any ban on using cell phones whilst driving in the States. Either that or people are ignoring the ban. They are so ubiquitous all over, people don’t seem to be able to live without them. Is it that people feel more important being in touch all the time or that their lives will not continue to run if someone cannot get hold of them for an hour or two? We watched one woman at dinner on Saturday night, she had three or four kids (my  back was towards their table) and left them to get on with things at the dining table whilst she went into a closed section of the dining room to chat for ever. Nothing is that important. When she returned, she still was not “with” her kids because she took – or made – another couple of calls. In my view it is important to “be” with the people in the room with you.

Had a little panic sorting out my plethora of medications last night, thought I had left my Plavix behind (could only have been in the rental residence) and I had visions of a child walking into the place and thinking they were candies. Plavix being a blood thinning medication. Luckily we found them between us. Phew.

I haven’t yet had a chance to look at recipes, still sorting out from our trip (I’m at the stage of needing a vacation) will do so tomorrow. Hey, I can now scan recipe pictures again although have had to completely re-arrange my desk in order to accommodate the new machine.

Forgot, I heard a story on GMA today that there is a clinic in the US offering a European developed hypnosis therapy which in four sessions, convinces the patient that they have had lap band surgery and therefore they lose weight. Lead me there. Admittedly it costs $3,000 but oh the joy of believing you have had the surgery done and you cannot eat the vast quantities of whatever was causing your problems. They also hypnotise you about food choices too I gather. It is called The Gastric Mind Band. Read about it here http://tiny.cc/f8rgu

Another snippet I caught: self tightening shoes, for those who are arthritic and generally elderly or infirm. http://tiny.cc/5z8r8 and idea developed from the Michael J. Fox movie Back to the Future apparently.

Hope you have a great day