Had a fun evening with some of our friends, unfortunately one couple unable to make it. The food was relatively simple as I mentioned yesterday, although we did have a couple of additions, one being a salad of tomatoes and cucumbers, the other being a pineapple dessert, both delicious. I forgot that we also had a recipe which we have been enjoying around here for years, an hors d’oeuvres which is basically a spread on tiny slices of bread topped with a piece of cucumber and sprinkled with dill. Ate too much, drank too much, had fun. I nearly forgot to mention the two pairs of earrings I was given. They are delightful and made by the son of one of our friends – in fact he joined us last night, we had none of us seen him in years as he has not been living locally. I will take pix of the earrings later.

We hadn’t thought of it before, but I do enjoy a glass or two of bubbly on my birthday (other times too of course) but we didn’t want a whole bottle. In Canada we can buy small bottles which are about a glass size each. Having phoned a few stores they all assured me they didn’t have any, so I settled for a beer. In the afternoon we decided to go out to a few places including our garage as we had a rattle. We ended up at Lowes Foods which was one of the stores I had phoned, guess what, I found packs of 4 bottles of Korbel. Not a bad bubbly. Needless to say, I bought them. The rattle in the car, by the way, was a muffler clip which has broken, nothing major.

We also checked out the private access to the beach. We didn’t actually go down on to the beach, lot of steps but sat on the bench and looked around. 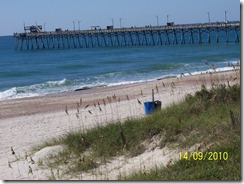 The pier is Bogue Pier which has weathered quite a few storms over the years although it has occasionally had to be repaired. 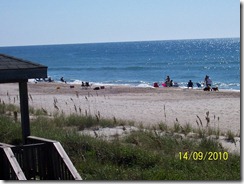 This is looking the other way. Seems like a nice spot to go.

Having mentioned the starter we had last night, I thought I would share the recipe.


Instructions:  Mix first three ingredients. Spread on slices of bread. Top with a slice of cucumber. Sprinkle with dill weed.