I just watched a segment of an interview with Dr. Steven Hawking. He is supposed to be the cleverest man in the world? Not sure who says that, but he is certainly brilliant. He says in his latest book that God was unnecessary to create the universe and because of gravity it would have created itself spontaneously. This will upset a lot of North Americans who believe wholeheartedly in their God and their religion. Go to http://tinyurl.com/3a8mfj9 to read what he has to say. I must confess I was as interested in the doctor himself, he has ALS and these days is almost completely paralysed. He uses a voice synthesiser to speak which takes a while for him to respond so in interviews his responses are already prepared. I have just been reading what Wikipedia has to say about him and it is fascinating http://tinyurl.com/3srhg. He has had a genius rating for the whole of his life, so now I know who says he is the cleverest man in the world. He found university boring!!! Incredible man. His latest book, The Grand Design, is due for release this month. I will try and read it although I suspect I might have difficulty understanding everything.

Well, we are now winding down or do I mean up, to our vacation trip on Saturday. I am worrying about whether my Avon orders will be dealt with before I go as obviously with a holiday yesterday, things will be somewhat delayed. Of course we have to get a few Americ 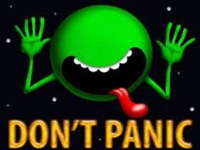 an dollars to carry us down there (tolls and such) – Matt does the packing as he is good at it and he never does it til the last minute which makes me nervous. A friend says she throws things into a basket as she thinks about it, a good idea. I have one dishcloth set aside so far!!!

Last night I watched the Dr. Oz show which we do now and again. One of his guests had lost over 200 lbs. on Weight Watchers which took her 2 years and she has now kept it off for 6 years. Wonderful. She finally achieved it, she said, by writing recipes and in fact now has a recipe book available. However, one of the things which helped her, she said, were the following brownies and she challenged Dr. Oz and an audience member to see if they could identify the secret ingredient. Neither of them could do so. It turned out to be black beans. 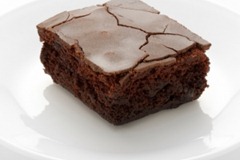 Preheat oven to 350°F. Lightly spray a 8x8 baking dish with nonstick cooking spray. In a food processor, mix all brownie ingredients (except chips) together. Chop on high, until smooth. Clean off sides and blend for another 20 seconds. Add the chips and stir well. Spread into the 8x8 baking dish. Bake for 20 minutes, until toothpick comes out clean. Cool for about 1 hour at room temperature.

With a whisk attachment on an electric beater, blend all ingredients until light and fluffy. Spread evenly over the top of the cooled brownies. In a microwave safe bowl, melt the 2 tbsp of chips with a 2-second spray of nonstick cooking oil. Using a spoon, swirl the chocolate on top. Allow it to set in the refrigerator for 20 minutes. Serve and enjoy. Don't forget to have seconds!