Today, for some reason, we are both having ECGs. Our doctor periodically comes up with a test which she can get done easily, and decides we should have them. Both of us have had lots of ECGs over the years although I can’t quite remember when I had my last one.

At the moment I am trying to read Palimpsest by Catherine M. Valente which was highly recommended by readers at Goodreads (are you a member?) but I am not sure about it at all. It seems a very odd kind of book to me. As of now I am faint but pursuing.

I arose this morning to pretty heavy fog. Yesterday was a gorgeous day with lots of sun but not terribly warm, as it chucked it down the previous couple of days, I suppose the fog is the result. I wonder if the sun will be strong enough to burn it off later.

No longer do I have to watch the hurricane situation carefully, we were lucky, none of them came near us whilst we were in North Carolina, in fact we had perfect weather the whole time we were there. Wall to wall sunshine. However, I was keeping my eye on 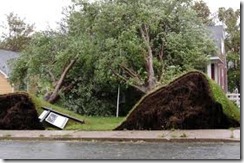 my hurricane software Tracking the Eye.NET and was delighted to see Igor head away from us. The people of Newfoundland were not so thrilled though. Apparently Igor did a lot of damage there and the army has been called in to help. One guy was swept out to sea. One wonders how that happened, was he one of these idiots who surf during hurricanes?

Oh dear, I just went on the net and discovered Tony Curtis had died yesterday of a cardiac arrest at 85. Not very old these days. He was one of my favourites years ago, he seemed to appear in everything. Just looking for this picture, I saw some pictures of him as he was today and am quite surprised at the changes time had wrought in him.

Matt went out shopping early this morning and I asked him to add ground beef to his list. Maybe I knew I would come across this recipe.

1 can cream of chicken soup

Salt and Pepper to taste

Pare and slice potatoes in bottom of buttered casserole, can use cooking spray. Cover potatoes with meat mixture, another layer of potatoes. Poor enough milk until shows just barely around the edges of the casserole. Top with Marble Jack cheese.