Early night be damned, it was gone 11 by the time I got to bed. Then I couldn't sleep again. I even took a sleep aid but it didn't help. Most nights I go to bed and zonk out, but not the last couple. Oh well, better luck tonight.

Ladydog is picking up some Viet/Thai food for lunch today which will make a change. Oh, that reminds me, it turns out the Sweetbreads weren't rotten at all, they were in the freezer. Looks like I am going to end up with 2 lbs. Luckily Matt doesn't mind leftovers. I never understand people who won't eat them, I know a number of people who turn up their noses at "réchauffés" which wouldn't work for us as I frequently cook for two meals at once or for the freezer. I know at least one person who doesn't like food that has been frozen. Our food was good and I still have enough to have lunch tomorrow. Ladydog also picked up some cherries from VSM along with the sweetbreads. The cherries turned out to be $20 a bag, about 1 kilo. They'd better work at that price. Ladydog apologised, she hadn't realised how much they were until she looked at the bill. She also brought us some fresh corn on the cob, a bunch of nice leeks and some tomatoes. I think we came out of the deal pretty well.

Odd, last night I gave Matt a massage on his thigh and he was moaning and groaning at me. This morning I have just done it again and no yelling at all. Maybe I wasn't doing it hard enough!

10:00 p.m. I just sent Matt off in an ambulance as he was having TIA (mini stroke) symptoms. He has had them before, probably why he has ended up with dementia. I requested that I NOT be called at 3.a.m. this time. Actually the symptoms had more or less disappeared, but they took him anyway. Just as well. One of the women, both of them were women, asked if I needed more help. I said definitely, she said she would tell whoever that I needed some. Wonder what that will produce.

I am not actually worried too much, because he has had these symptoms many times, but one never knows I guess.

Friday - Posted this for the wrong time this morning. Don't know what's happening with Matt. Just rang the hospital and was told he was on a ward and to call back at 11 a.m.

Asparagus, Onion and Potato Gratin Makes a Great Vegetarian MainThis meatless main dish is hearty and cheesy yet light enough for spring. Be sure to use fat asparagus spears; thinner ones will overcook. Feel free to use 4 oblong, shallow gratin dishes for individual 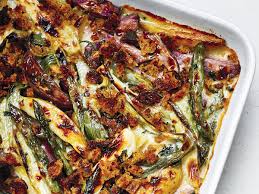