David criticized me for fussing about the PSWs, but Tuesday morning one came at 7 and Matt would NOT get up. Neither for her or for me. Said he had had a bad night! I don't really think so and anyway he sleeps a lot during the day. I have been assured they will come at 9 tomorrow. We shall see.

Wednesday I have this "stress test" which takes 3 hours. I have now been told I must not drink even decaf coffee for 12 hours before. I can have a light breakfast and take a snack, for after, It's called a Persantine Cardiolite Scan and I will be slightly radioactive after it. If one was travelling by plane, they would give you a certificate to pass you through the check point.

Before he went into hospital Matt complained of toothache. I told his nurse. Tonight he is complaining again so obviously they didn't do anything for him. I just emailed a local dentist and asked if they could assist me.

Ladydog brought me some leeks from the Mennonite stand and I have finally managed to deal with them, boy were they filthy, and chop them up for soup which I am, of course, making in the Instant Pot. Supper is now ready for Wed. night. 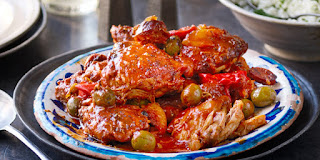