Had a lovely day today. I am a tad annoyed because they told me hours and I ended up spending 5 hours there, I  was not happy.. Ladydog was sitting with Matt, but he still got very agitated because he was worried about what was happening to me. I don't know what he thinks was happening. I tried to explain it was just a test, but.... Of course I am now radioactive for a while - not sure how long it lasts. When I was finally allowed to eat, it turned out they had a picnic table outside and I sat in the . n although there was a cool breeze it was still pleasant/ When I got home, there was a vase full of gladioli which are absolutely lovely. Jan was kind enough to stay for the whole time so when I got home, she shot off home. I then got treated to almost tears.because he didn't know what was happening to me and if I was alright!!! Oh well.

Ladydog also brought a couple of corn cobs which I cooked for supper and they were delicious. We then had some of the leek and taties soup I made last night, it was delicious. I will share the recipe, but I didn't use the same measurements - or not exactly.

Whilst I was out, got a bunch of calls from the dentist to whom I sent an email last night. They called again once I was home.so I have an appointment for Matt next week.

Not only that, Dr. Jahromi's office called, he is the vascular surgeon, so maybe they have a date for me. Of course, he won't have today's results by then I don't think.

This was the recipe I used for the soup. I used 4 leeks and maybe a tad more cream. I used the fish sauce but couldn't tell the difference, but the soup ended up being really delicious so maybe it was the fish sauce. We have some left for tomorrow, yum. 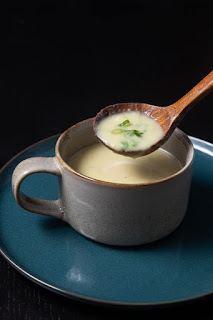 Soup is super easy to make with simple ingredients. A satisfying bowl of comfort to warm your soul!

3. Season & Thicken: Add in 1 cup (250m) heavy cream. *Note: Some enjoy the potato leek soup without blending. Since we like a thicker soup, we blend the potato leek soup at this step with an Immersion Hand Blender. Taste and season with more salt if desired (for reference, we added 2 large pinches of salt at the end to season this properly).