So having decided to do exercises in the afternoon, I forgot today. I do have an excuse mind you. I might say that Matt's right thigh muscle doesn't seem to bother him any more but the left one still does. He  may not realise it, but I think even that one is getting better. Not very fast, but nevertheless... Also, I have started massaging him and this morning the PSW took it on himself to do what I did with massage so that was good. He also took it on himself to change the pillow cases which is all very well, but if he wants to do that, better to do it at the weekend when I do laundry anyway. Will have to talk to him next time he comes in.

My excuse was Victoria Street Market. I dragged myself out (not a good day for me today) to go there and get the sweetbreads we had ordered for ladydog and I. When I got there, they told me they were no good any more and had gone rotten!!! Said I should have been in last Tuesday. Only trouble was, when Brad, one of the butchers phoned me, it was later in the week and he said that he had found out nobody had phoned me. I just did not have  time to go in until today, never occurred to me they would spoil, figured they would be refrigerated. I was a tad annoyed to put it mildly. Apparently they are going to phone about it and then call me. Hopefully they can get them in for Thursday which means ladydog can pick them up on her way past. So, the only thing I got was a $3 tomato. Big and juicy, hope it tastes as good as it looks.

Tomorrow morning is the Alzheimer Spouses Zoom meeting. I need to make sure Matt knows where I am and how long I have been there. Last time he swore he hadn't seen me all morning and was very upset with me!!

I contemplated buying a sirloin steak. I had completely forgotten a recipe we used to do regularly on the barbecue when we lived in NC and then did on our indoor/outdoor grill. We called it a London Broil, but were very surprised to come back to Canada and find a London Broil was a totally different thing altogether. Anyway, I suddenly remembered it the other day and decided that a thick sirloin steak would be a good cut to buy. Looking at the recipe, I see we used to use inside round when we bought it here. In NC we just bought a London Broil.

For Flank steak, use same marinade (only less) and flash fry in skillet for about 5 minutes a side. Let 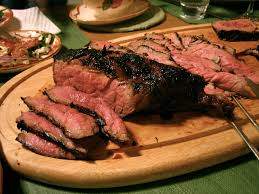 stand for 5 or 6 minutes before cutting diagonally.

1. Mix up marinade. Marinate meat for several hours, minimum 8 hours,  the longer the better, store in fridge and turn frequently.

2. Light barbecue and get it good and hot then reduce heat to medium to cook. Suggest you  remain with meat initially to reduce flare ups. Give it 10 mins on the first side, baste and then turn, then cook 5 mins a side until you have cooked for a total of 25 mins. from the start.

4. Let the meat stand 10 - 15 mins before carving. Carve at a bias across the grain, not straight up and down.

This is the recipe we use.