As Matt has difficulty negotiating his way into the hairdressing salon and as I am about to start braiding both his hair and mine, I have arranged for our hairdresser to come here next week. Really nice of her. I, of course, can go there, but it is too difficult to get Matt there. Last time the hairdresser almost carried him into the salon.

I seem to have ended up with a plethora (love that word) of mushrooms so found a recipe for making Creamy Mushroom Soup in the Instant Pot, of course.

Matt complained of toothache on two separate occasions. I have asked him about it and so has ladydog but he denies any knowledge of toothache, so having booked a dental appointment, I have cancelled it again. Which, of course, means he will be complaining of toothache again soon. ladydog suggests Sensodyne toothpaste. Don't know if he will notice the change or not.

Just heard a report that the highest temperature ever recorded on earth was yesterday in Death Valley, "One of the hottest air temperatures recorded anywhere on the planet in at least a century, and possibly ever, was reached at Death Valley in California's Mojave Desert where it soared to 54.4° Celsius (130° Fahrenheit)." That's hot. I've been having trouble with the heat here, I can't imagine what I would do in temps like that.

Yet another recipe I really should try. 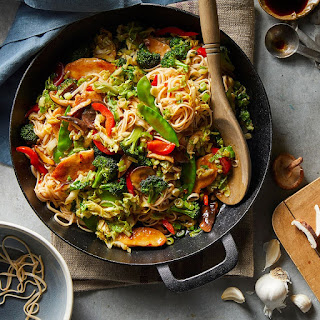 2 Tbs plus 2 teaspoons sesame oil, divided3 Tbs reduced-sodium soy sauce¼ tsp crushed red pepper12 oz boneless, skinless chicken breast, cut into ¼ -inch slices8 oz lo mein noodles1 tsp chile-garlic sauce3 Tbs vegetable oil, divided5 oz mushrooms, thinly sliced4 cloves garlic, minced2 Tbs chopped fresh ginger1 bunch scallions, thinly sliced2 cups small broccoli florets (about 1 large crown)1 red bell pepper, sliced1 cup snow peas, halved4 ½ cups thinly sliced napa cabbage ( ½ head)¾ cup unsalted chicken broth1 tsp cornstarch1. Combine 2 tablespoons sesame oil, soy sauce and crushed red pepper in a large bowl. Add chicken, toss to coat, and set aside. Bring a large pot of water to a boil. Cook noodles in the boiling water according to package directions. Drain, transfer to a large bowl and toss with the remaining 2 teaspoons sesame oil and chile-garlic sauce. Set aside. Heat 1 tablespoon vegetable oil in a large skillet or wok over medium-high heat until shimmering. Add mushrooms and cook until juices are released and the mushrooms are golden and tender, 4 to 5 minutes. Stir in garlic, ginger and scallions and cook until fragrant, 1 minute. Transfer to a medium bowl. Add 1 tablespoon vegetable oil to the pan and heat over medium-high heat until shimmering. Add broccoli, bell pepper, and snow peas. Cook until tender-crisp, 2 to 3 minutes. Stir in cabbage and cook until wilted, 2 minutes. Transfer to the bowl with the mushroom mixture. Heat the remaining 1 tablespoon vegetable oil in the pan over medium-high heat. Add the reserved chicken, leaving the sauce in the bowl. Sauté the chicken until cooked through, 2 to 3 minutes. Meanwhile, add broth and cornstarch to the reserved sauce and whisk to combine. Add the sauce to the pan with the chicken; simmer until thickened, 1 to 2 minutes. Add the vegetable mixture to the pan and toss to combine. Transfer the chicken and vegetables to the bowl with the noodles and toss to combine.Servings: 4Author: Lauren GrantSource: Diabetic Living Magazine