I called the hospital around 9 and was told to call back at 11 as "she hadn't visualised him yet" - I thought he was in Emergency but it turned out they had him in a ward. After a lot of hoo ha, I ended up speaking to him, he wasn't very happy and didn't really know where he was. Later the doctor - I presume the "she" - phoned me and said as far as the TIA was concerned he was fine. They want to do a CT scan tomorrow apparently (today I guess) and would keep him til Monday. I was surprised but the doctor said she thought I might like a respite. I wasn't sure about that because I know he will be distressed not being with me. Discussing it with ladydog later she thought it was a good idea. I haven't really made up my mind.

I spent the rest of the day reading and doing nothing much of anything. I got rather bored. Lonely too I guess, we haven't been away from one another this long for a very long time. I had a few naps in the afternoon but got a couple of phone calls which woke me up. In the evening I watched Jeopardy and then rented an On Demand movie, The Secret Garden. I read the book a long time ago but had totally forgotten the story. Colin Firth was in it and he has always been a favourite of mine. I enjoyed the movie very much. Think I can watch it again if I want to for the same price. Hope so, it wasn't cheap.

Also, did my Spanish during the day - I only do a few minutes a day but seem to be getting somewhere with it. Still at a very simple stage though. Amazing what I have forgotten but also amazing how I remember certain phrases every so often when they crop up.

For lunch I had left over Pho from our Viet/Thai lunch on Thursday and then for supper I had some cevaps. I enjoy them and they always remind me of Yugoslavia, as it was when I was there anyway. Technically I should have served them on a bed of chopped onion as they did when I was there. One of the PSWs we had a while back came from that part of the world and said he made his own cevaps. I cheat and buy them. I believe they are made by double mincing the meat, they are then made into small sausage shapes but no skins.

Saturday morning is wash day and I have a pile of stuff to do, later I will phone the hospital and see how things are and maybe talk to Matt. At that time perhaps I will make a decision about bringing him home.

I am not sure how authentic this is, I know I was told that they minced their meat twice to make it really fine. That was when I was in Yugoslavia. 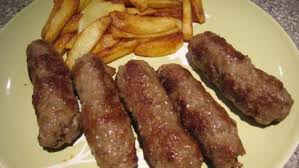 A delicious little sausage-like meat. Great served as a sandwich.

1. Preheat a grill for medium-low heat.

3. Lightly oil the grilling surface. Grill sausages until cooked through, turning as needed, about 30 minutes.