Another of those Days.

Today my legs, hips and rear end were all hurting so I took some Tylenol 3 - which I try not to take because they are going to be scarce in future as the doctors are running scared about Opiods. I had more or less decided not to go to the walk-in clinic because of getting to my car. When ladydog came she persuaded me to call my family doctor as she said her doctor was doing internet stuff these days. I did and they asked me to send pix so ladydog took a couple and we emailed them to the doc. They arranged for me to have a consult with the doctor later in the day between 2:30 and 3.

Poor ladydog, when she arrived, she was fuming. She had ordered Subways online and just before she got there, found out that they hadn't done the order because their internet was down. In the end we didn't have subs 'cos she was so mad with them for not letting her know earlier, by phone, if no other way. In the end we decided to have Thai/Viet food so we ordered it and she went to pick it up. I had ordered Pad Thai for Matt and I. We had enough noodles to feed an army. So did ladydog. I have saved a lot for future munching. I had just settled down to eat when the phone went. I forget who or what now, but eventually went back to my lunch when shortly after the phone went again. It went on like this for a while. Eventually people let me have lunch in peace. There was no way I could eat all my noodles and I didn't even give Matt all his, I had put his food on a plate. He then went to his lounge chair and shoved dog biscuits into Zoey. Then the phone went again, it was Purolator with the waterproof mattress cover I had ordered from Amazon. The courier wouldn't come upstairs even though I told him I was using a walker. Of course ladydog went down and let her temper go on the poor man. She told him her 83 yr. old neighbour was in tears and how dare they not come up and deliver to my door etc. etc. I felt quite sorry for  the poor guy.

I then got a phone call from the doctor, much earlier than they had said so ladydog decided to leave anyway, the doctor suggested my problem could be shingles. Something that had never occurred to me. She said I might have to go in to see her next week but she would send me some ointment meanwhile and call me next week. From what I know of shingles, I don't think it can be that. But what do I know.

Later I phoned Para Med who provide the PSWs and asked for a second guy for half an hour to help pout the mattress cover on. No way I can help. They said I had to call the LHIN co-ordinator. I did and she eventually called back. She said the PSWs are not allowed to lift anything heavy. Said she would talk to Para Med and call back. Putting a cover on a mattress is not really heavy work just awkward. Have done it in the past when we had bed bugs. So, will expect to hear from her tomorrow.

Of course, I forgot to mention I didn't get much sleep because I was so damned hot I had to get up and sit reading near the A/C so of course wanted to nap this aft. I had just dropped off when I got a phone call, bit later I had dropped off again and was woken by another phone call. Think I should unplug the bloody thing. Of course they are all basically important. But..... I don't even remember who called me now apart from Jamie from the bowling league and the ones I have mentioned above oh, and of course tomorrow's PSW. They always call and let me know they are coming.

I am told the convention will be over tonight so hopefully I will get my TV programmes back again. Mind you with no TV to watch, I get my blog written early. Not that that helps if I can't sleep anyway. I ordered a portable A/C but no idea when it will arrive. Hope they will bring it up when it comes! It it comes on a Thursday I will send ladydog down to tear a strip off them LOL.

Ostesibly tomorrow should be a quiet day, ha!

I keep coming across recipes I haven't tried yet.

The challenge: The flavors are always too bland.

Our solution: It’s true that the long, slow cooking period mellows flavors. But bold spices, in bold amounts, will hold their own over time. Here, we start with big flavor from a good amount of curry 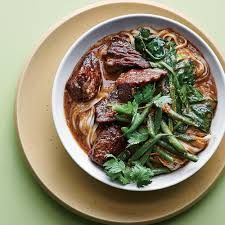 paste and fish sauce, and we finish with fresh touches of cilantro and lime juice that amplify the taste of everything. Serve over a bed of brown rice or brown rice noodles to catch all the sauce.

1. Heat a large skillet over medium-high. Add oil; swirl to coat. Add beef, and cook in 2 batches, turning occasionally, until browned on all sides, about 6 minutes. Place browned beef in a 5- to 6-quart slow cooker. Add stock to skillet, stirring and scraping to loosen browned bits from bottom of skillet; transfer mixture to slow cooker. Add curry paste, fish sauce, sugar, and onion; stir to loosely combine. Cover, and cook on low until beef is very tender, about 8 hours.