I posted a recipe yesterday which included pork belly. I am not sure I will be able to find that so I Googled a substitute and apparently pork shoulder is a good cut to choose. In case you want to try the recipe, I thought I would pass on that information.

I went down to get  my blood work done this morning and completely forgot a urine test. I haven't done a blood test for diabetes in some years. That's not the only thing I am being tested for, but the urine is a necessity for diabetes tests. Surprisingly I was told to bring a specimen back tomorrow.

Just seen it is Friday the 13th tomorrow.  I am not really superstitious but I know many of the superstitions because my mother was. Matt and I never cut our nails on Friday (his mom) and Sunday (mine). Occasionally people will unpack their bowling shoes and put them on the table whilst doing so, horrors. Funny how these things stick from childhood. Matt's family, being a seafaring bunch, believed in many superstitions. They would not use the word pig and always called it a gussy. Something I had never heard before - it was a superstition from the north of England. Of course black cats crossing your path or walking under a ladder were considered bad omens and apparently if Matt's father or grandfather walked between two nuns, they would turn round and go home for the day. Just thought, don't know how you would know these days, many nuns don't wear habits any more. Got any superstitions which were traditional in your neck of the woods?

Today ladydog and I agreed on Thai/Viet food for lunch so I ordered and she collected. We ended up with a lot of food. Matt can eat mountains but the Thai green curried chicken was too much. In the end, I had enough leftovers, together with some French Garlic Chicken I had cooked last night, to make us a very substantial supper. Zoey meanwhile was being fed dog biscuits until she had run out when she promptly lay down and dozed.

Talking of ladydog, she is a member of a couple of bands and plays the French Horn. I have never seen or heard her band but today she steered me to Facebook where they are playing Gilbert and Sullivan in one video and there are other videos in the same area. I can see ladydog and her French Horn. I decided I like El Relicario better so that is what is here. Enjoy. If you want to see more there are several videos to watch/listen to.


I posted this recipe before I think but had forgotten it so when I saw the picture I wanted to post it and when I discovered it would be the second time, I did so anyway. Looks so good. The young lady who drew my blood this morning was either Vietnamese or Thai so I mentioned what we would be having for lunch and told her how ladydog had tried genuine Thai food in Thailand (as actually eaten by them) and been unable to eat it. Much to my surprise she said she couldn't eat it either, but her sister covered her food in chiles. 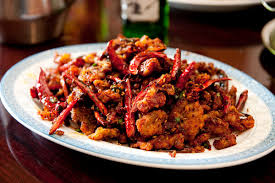 the biggest of the Dongbei restaurants in Queens, makes an elegant, tender version of a popular Dongbei stir-fry of lamb with dried chilies, made fragrant and crunchy with cumin seeds — a legacy of the nomadic Mongols who long ruled Central Asia, carrying spices on horseback along with their arrows. Lamb is considered a Northern taste and excessively “strong” by many Chinese cooks; it is always cooked with powerful aromatics, like chili peppers and garlic, to subdue it.

1. In a bowl combine egg white, wine, cornstarch, salt and pepper. Add lamb and set aside to marinate 1 hour.

2. Heat a large wok or skillet over high heat until a drop of water sizzles on contact. Swirl half the oil into wok and carefully add lamb, spreading it in a single layer. Let sear a moment, then stir­fry briskly just until lamb is no longer pink. Transfer to a plate. (If your wok is not large enough to hold all the lamb, do this in 2 batches, using extra oil)

3. Swirl remaining 1 1/2 tablespoons oil into empty wok, add cumin seeds and chiles and stir­fry a few seconds until cumin seeds start to pop. Press chiles against sides of wok to char their skins.

4. Add scallions and stir­fry 1 minute. Then return lamb to wok and stirfry 1 to 2 minutes more until lamb is cooked through. Turn off heat, sprinkle with salt and drops of sesame oil, and serve immediately.