I ended up cancelling lots of appointments this week  but I still seem to be running in circles. I was going to take the car in for service this morning, but as we have to wait for it, I just didn't have time. Then last night I was online til gone midnight talking to Amazon and saying I hadn't had my earrings even though it said they were delivered. What I hadn't realised was that the mailman had come late in the evening and just put the parcel in our mail box. However, before I discovered that I was on the phone with Canada Post this morning for quite a while too. Like I have nothing else to do. Anyway, I do now have my earrings and they are pretty. Even Matt likes them.

Not only that, I am making cards for the guys at the bowling alley and trying to reconcile bank statements (for November would you believe) and altering and printing phone lists and, and, and...Matt has been nittering me about getting our ears lowered (think mine are fine) and the hairdresser told us not to go in at the beginning of the week so we will have to do so on Friday maybe.

So, that is why I didn't write a blog last night. Didn't do my Spanish either, first time I have missed it since I started.

Last night we watched the Mormon Tabernacle Choir which was super - Matt thought he had never seen them before but we catch their performance most years. The main singer was Kristin Chenoweth whom I had never heard of but she was excellent. Afterwards saw Liona Boyd who is a premier guitarist. She had people with her including one young man playing various wind instruments. One of which I now have to try and find, neither of us had ever seen it before. I have just gone through dozens of pictures of wind instruments but I cannot find the one we saw.

I love meringues but have never been particularly successful when making them. The ingredients in these appealed to me. Especially as I now know I posted this before. Oh well.

“Don’t judge the taste of these cookies by the crags and cracks,” says sous-chef Merrin Mae Gray of 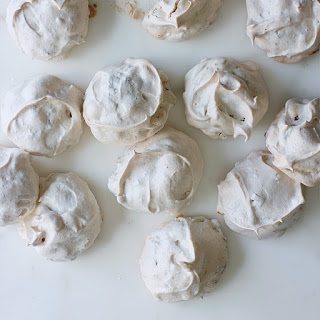 L.A.’s Rossoblu. (Their Italian name is brutti ma buoni, “ugly but good.”) The pecans and potent grappa are unexpectedly elegant, and the crisp outsides and chewy centers make these meringues seriously addictive.

1. Preheat the oven to 300°. Spread the pecans on a small rimmed baking sheet and toast, tossing them halfway through, for about 20 minutes, until browned. Transfer to a work surface and let cool, then coarsely chop.

2. Line 2 rimmed baking sheets with parchment paper. In a stand mixer fitted with the whisk, beat the egg whites at medium-high speed until foamy, about 30 seconds. Beat in the sugar 1 tablespoon at a time until the whites are stiff and glossy, 5 to 7 minutes. Beat in the grappa, cinnamon, nutmeg and cloves. Using a rubber spatula, gently fold in the chopped pecans.

3. Spoon heaping tablespoons of the meringue onto the prepared baking sheets, spaced 1 inch apart. Bake for 15 minutes. Reduce the oven temperature to 200° and bake for 1 hour and 15 minutes, until the meringues are firm on the outside but still chewy in the center. Transfer the baking sheets to wire racks and let cool completely.

Author Notes
The meringues can be stored in an airtight container for up to 1 week.