Busy day, morning not too bad but had to have lunch fairly early to be sure to get "our" parking spot at the bowling alley. Still a lot of snow on the ground and nobody has cleaned the parking lots yet. Our front of building lot was still very snowy. In fact they had a big plow to do it  when we got home, we have a small plow in the garage, wonder why the super doesn't do it? Odd.

Anyway, off to the bowling alley. For the first game, both Matt and I bowled up a storm, I got 179 and Matt 173. Only trouble was we couldn't keep it up. Matt's next two games were lousy and mine were almost as bad. However, my average stayed the same, phew. However, I want it to go up again. It was announced that our Christmas lunch will be on the 23rd.

After bowling, went up to the little liquor store we like. I had ordered some booze and it was ready to be collected. Great, other store doesn't do that. I then dropped  my wallet out of which several cards fell on the floor a) embarrassing, b) damned annoying - so much for saving time by ordering. We then went on to the place which had repaired my gold chain. I was wearing my aquamarine which, when last appraised some 30 years ago, was valued at $2,000 USD. I asked them how much they would give me for it. After examination, they said $350. Bloody joking. In fact, they were valuing the gold and didn't give a damn about the store which is an unusually large aquamarine. I was mostly just interested, but .... trouble is I can't really leave it to kids in England, how would anyone get it there and I rarely if ever wear it.

From there the gas station, standing pumping gas I was flipping freezing to death. However, we have to go to the doctor's tomorrow in the next town and I had about a quarter tank. I planned to go on to Victoria St. Market to get some bananas (I eat one a day for cramps) but by then I had had it and only needed 2 bananas anyway and you know how much they cost  me at Victoria St. Market!!! One of our team is from Croatia and I was telling him what good fish they have there. I believe he and his partner went after bowling. Be interested to find out next week.

By the time I got home and sorted out, I was knackered. So had a drink and then got on with supper. Last of the sirloin steak. I could drink the sauce I made forever, it is so delicious.

So now I need a recipe. A man on another team is from Hungary and his wife is Canadian. They had brought something fora team member which they called Palacsinta. They uncovered the plate and showed me. I now realise that name actually covers Hungarian Pancakes and not necessarily the filling. However, for what it's worth, here is a recipe. You can fill them with all kinds of things such as cream cheese and sugar or the ideas from the recipe below. There seem to be lots of different recipes for these Palacsinta as well as multiple fillings. I  suggest you google for yourself if you are interested. 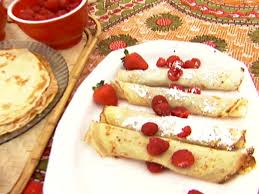 1. Mix eggs, flour, milk, sugar and salt to make a smooth pancake dough. Let the dough rest for 1 to 2 hours.

2. Stir in the carbonated water at the last moment, just before cooking the pancakes.

3. Heat an 8-inch frying pan. When the pan is hot, add 1/4 teaspoon of the butter. Let butter melt and swirl to cover the bottom of the pan.

4. Pour a ladle of the batter into the pan and gently tip and twist the pan so that the batter covers the entire bottom of the pan. When the top of the batter bubbles, turn the pancake over and cook for 4 or 5 seconds longer. Remove the pancake. Continue until the batter is all cooked; add butter before cooking each pancake.

5. Serve by spreading raspberry jam, cocoa mix, or your favorite filling and roll up the pancake, serve with fresh berries.

Author Notes
These pancakes can be served hot or cold.