Well I hope you all had a good holiday and enjoyed all the celebrations and the food you ate. Most of my pigging out was Christmas Eve with the result that Christmas morning I was not feeling too good, no, not the alcohol, although I did have egg nog which was very rich, the quantity and types of food. I was somewhat more restrained on Christmas Day. I had my ham and champagne fizz, Matt just had the ham, he has now decided he doesn't like English mustard which he has been eating for years. Oh well. Later I cooked the stuffed turkey breast which I had bought from my grocery store. Had them before, they are good and just right for the pair of us. Traditionally, in my family, we had Brussels Sprouts and I decided at almost the last minute to make bread sauce. Found an easier recipe than the one I normally use. Made it, it was delicious, and then I put it in the microwave to heat it later on, and forgot it!!! The Christmas Pudding which I bought at the Scottish store and which originated from Marks and Spencer's (UK store) was good too. Now there I was lucky, found some Rum Butter in the freezer.

I am getting concerned about Matt's cough. Nothing seems to be helping it at the moment. Might have to take him to the doctor. He is sneezing as well. I wrote this Boxing Night (26th) and he was coughing all night. Today he has hardly coughed at all. I, on the other hand, have started to do so.

As both Sunday and New Years was on the horizon, I was totally out of fizz. I was tired and really couldn't be bothered to walk all the way to the car, so, delivery company. Figured $10 or $12 was worth it. Having placed my order online I agreed to pay Interac. So, once I had my bill I did so on line. The guy arrived much sooner than expected and they hadn't received the payment. Turns out what I thought was their email, wasn't. Someone called me to say the driver would be back. I then called them and explained I had got the wrong email and had now cancelled the transfer. She was rather unpleasant and didn't give me the correct email telling me the driver was coming back to "grab the stuff". Later another woman called and gave me the correct email and all was resolved so easily.

This is what we had for supper on Friday. You know, every cook seems to think you have fresh herbs on tap the whole time, or maybe lots of lemons to use. As for the saffron, I happen to have some, but I bet not many do and it is sufficiently expensive I would think most people wouldn't buy it anyway. I didn't think it made any difference but I did use it. I didn't have loads of crusty bread either so I used cauliflower rice. Not sure how many calories would have been in the bread, delicious as it might have been. After all that, it was good but needed more salt in my opinion. Each to his own there I guess. I used to grow fresh herbs on our balcony, but now it is too much for us to clamber outside and water them all the time, so, dried herbs it is. If you have fresh herbs, way to go, use them. 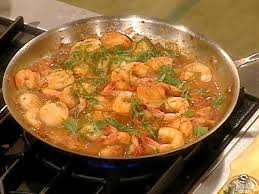 2. Preheat a large skillet over medium high heat. Add oil (1 turn around the pan) and butter. When butter melts into oil, add scallops. Brown scallops 2 minutes on each side, then remove from pan.

3. Add an additional drizzle of olive oil to the pan and add the garlic, shallots, and crushed red pepper flakes. Reduce heat a little and saute garlic and shallots 2 minutes, stirring constantly. Add wine to the pan and free up any pan drippings. Reduce wine 1 minute, then add stock, tomatoes and saffron threads. When liquids come to a bubble, add shrimp and cook 3 minutes. Return scallops to the pan and cook shrimp and scallops 2 to 3 minutes longer. Transfer shrimp and scallops to a warm serving dish and top with basil and lemon zest. Pass plenty of bread to enjoy the juices.