Trust, Movie, Present, Restaurant, Bowling, Is it Ham or Pork?

It didn't occur to me before, but living in an apartment, you can dial a number from the lobby which rings our phone. This  morning it did so and the young man said "I'm from Amazon" so I let him in (with the phone). I  then thought, anyone could say they were from Amazon. I might have been letting in any kind of criminal. He didn't even say he had a package for me which many delivery people do, identifying themselves by using my name. Oh well, it was a package from Amazon, a DVD version of Miracle on 34th St. - I have a VHS version but until yesterday, didn't think I was going to be able to play it. Later, I discovered that what I had received was a colorised version of the original Miracle together with a second disc which has several things on it including a copy of the original movie in black and white. I know some people think original black and white is more authentic but I must admit I like the colour and I really enjoyed seeing the original movie again. It was always my favourite. 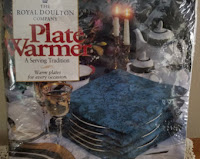 We met ladydog at the Red Lobster and I gave her her gift, a plate warmer, I have had one for a couple of years or so and I use it every day (assuming we are eating warm food) and think it is a wonderful gadget. I had quite a job finding it but now they seem to be all over the place. Originally they were  made by Waterbridge but they seem to be sold by other people now. There are two sizes and you can put two plates in each fold if you need to. They really are a great help, much better than turning on the oven especially on a warm day.

We had a good lunch, ladydog and I shared a lobster, artichoke and spinach dip (I think they removed the calories) and then I had a Caesar Salad (quite large for a side dish) with a few shrimp on top following by a dish of mussels in an excellent soup/broth. I really enjoyed them. By the time I had finished I was stuffed. Damn, I've done it again. Brought home a bag with their Cheddar Bay Biscuits and left it in the car. Still, going to the hair salon in the morning. What an idiot.

Mind you, after lunch, we went to the bowling alley where I distributed presents and got hugs, then we bowled. Matt wasn't sure he was going to manage it, but he did in the end. As it turned out, the league playing today were having their Christmas pot luck and they invited us to join it. I said thanks, but no thanks as we had just come back from Red Lobster. I couldn't have eaten a bite. One game not bad, one game not good. Matt was pretty consistent but not very good.

Our cleaner has accepted the offer of a glass of fizz as a Christmas drink. She is coming Saturday afternoon.

Being a poor confused Limey, I have problems with North American names for things. The following recipe is for a fresh ham which I would just call an uncooked leg of pork (with the skin on for crackling) but I know in North Carolina they refer to it as a ham. To me, ham is pork which has been prepared in a special way and then cooked before sale. Until I came to Canada, I had never heard of buying a cooked ham and then cooking it again. I always used to cook a leg of pork on Boxing Day, sorry Americans, December 26th, in fact once upon a time I cooked a goose for Christmas Eve, a Turkey for Christmas Day and a leg of pork for Boxing Day. Tradition. The crackling on the pork was the best part, in my opinion. The skin needed to be scored (cut in strips or some people criss cross to form squares). I would then oil and salt it, this doesn't seem to happen in the following recipe. 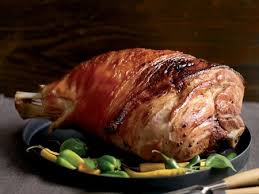 Butcher Ryan Farr of 4505 Meats in San Francisco likes to brine fresh ham in a chile-spiked liquid. The pork skin turns wonderfully crackly in the oven.

1. In a large saucepan, combine the salt and sugar with 2 quarts of the water. Bring to a boil over moderately high heat, stirring to dissolve the salt and sugar. Pour the brine into a very large pot. Stir in the peppercorns, chiles and cloves. Add the remaining 4 quarts of water and the ice and stir until the ice has melted and the brine is at room temperature. Add the ham, skin side up; the skin does not have to be submerged. Brine the ham in the refrigerator for 24 hours.

2. Preheat the oven to 400°F. Remove the ham from the brine and brush off the peppercorns and cloves. Set the ham skin side up in a roasting pan and let stand for 30 minutes at room temperature.

3. Roast the ham for 1 hour; turn the pan and add 1 cup of water halfway through. Reduce the oven to 300F° and roast the ham for 2 1/2 hours longer, until an instant-read thermometer inserted into the thickest part of the meat registers 150°. Transfer the ham to a carving board and let rest for 30 minutes.

4. Strain the pan juices into a saucepan; skim off the fat. Add the chicken broth and bring to a boil. Cut the skin off of the ham and break it into pieces. Thinly slice the meat and serve with the jus and crisp skin.