Had a delightful afternoon on Saturday. The woman who comes to clean for us joined us for a drop of bubbly or fizz. Because she was driving, she only had half a glass, but we had fun with her. As she walked in the door I gave her a duster!! She was telling us about her son and his girlfriend who went dog sledding. Showed us pix. I have always wanted to go dog sledding. Not likely to happen now.

Saturday evening I happened to catch Kismet on TCM. It is a 1955 film and the lead singer was Howard Keel who, in his day, was one of the best singers around. Sadly he died in 2004. He was in all the best musicals. I saw the musical in London and the lead was played by Alfred Drake who was another wonderful singer. The omitted some things from the show and put things into the movie. However, to me, it is a wonderful movie with wonderful songs. I was choking up seeing the movie once again. So guess what, I have bought if for myself. It's full of nostalgia for me. Matt used to love Kismet too, but sadly it has no meaning for him any more. Sunday night I caught Going My Way with Bing Crosby which I thoroughly enjoyed. Matt was eventually somewhat interested. He does appreciate music but not musicals.

Today, Monday, is our Christmas lunch at the bowling alley so we have to be there early. I think our other two team members will be there this week too. The family who run the bowling alley have  birthday and anniversary celebrations this month, two this week. No exercise classes until after Christmas. In fact they don't start again til the 30th which means I won't be able to go til next year. Pity, but there it is.

This recipe looks interesting. I have no idea what Pomegranate Molasses is or if one can get it locally. Also, the picture is titled as being over Hashweh - something I am totally unfamiliar with. Having looked it up, sounds good but doesn't look quite the same. Not only that there is an ingredient, barberries, of which I have also never heard! Up to you if you are going to try it.

Reem Kassis’ mother, Nisreen, would serve leg of lamb to guests because it was “a sign of utmost 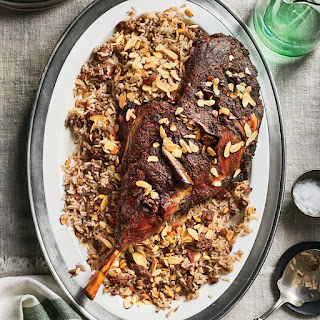 respect.” Large cuts of meat were expensive and often reserved for special occasions and celebratory gatherings. Kassis’ secret to making this next-level lamb is to roast it low and slow for several hours until the meat is nearly falling apart and then finish it at a higher temperature until the fat on the outside is candy-crisp.

2. Using a paring knife, cut slits all over lamb. Rub spice mixture over lamb, pressing into slits. Smash remaining 4 garlic cloves. Tuck bay leaves and smashed garlic into 4 of the slits. Transfer lamb to a wire rack set in a large roasting pan. Refrigerate, uncovered, at least 6 hours or up to overnight. Let lamb stand at room temperature 1 hour before roasting.

3. Preheat oven to 425°F. Roast lamb, uncovered, in preheated oven until spice mixture just begins to brown, about 15 minutes. Remove lamb from the oven, and reduce oven temperature to 325°F. Add 1/2 cup water to roasting pan, and cover tightly with aluminum foil. Return lamb to oven, and roast at 325°F until tender and almost falling apart, about 3 hours, adding more water if necessary. (Water in pan may evaporate too quickly.)

4. Increase oven temperature to 425°F. (Do not remove pan from oven.) Uncover roasting pan, and continue to roast until top is browned, 5 to 10 minutes. Transfer lamb to a cutting board; tent with foil, and let rest 15 minutes. Pull meat into large chunks and serve.

Have a great a wonderful Christmas and Happy Holidays to everyone.