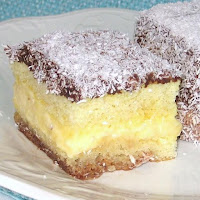 As I frequently do on a Saturday, I go to Victoria St. Market to get bananas. What a joke. Bananas don't cost nearly as much as I end up paying. This week I went for my bananas and ended up buying some cream, and some of their desserts. I believe the one we had tonight is called Cupavci but the girl who sold it to me said she couldn't pronounce it and I couldn't hear what she what whispering anyway..they really should teach their staff what desserts - or anything else - are called. Why I am fussing about it, we both found it to be delicious and want to be able to ask for more. The ones in the store were covered in almonds which were obviously toasted and in some kind of syrup. The whole  thing was absolutely delicious. Matt assures me I can get more if and when they have any. Maybe I'll phone them tomorrow and ask if they have some or will have some at the weekend.

Fairly quiet weekend - Lisa phone to say they were leaving and had decided to head West. Not sure they will find anything that interesting although they might find the odd lake in the way. I'll be interested to see where they ended up. Stratford-on-Avon, Ontario, is West of here if they were headed that way.

Tonight (Sunday) I watched The African Queen which is a wonderful movie and apparently the only movie Humphrey Bogart won an Oscar for. I think he deserved more than one. He is one of my favourites. Maybe I should say 'was'.  Of course Katherine Hepburn was in this movie too.

It occurred to me that many of the recipes I have for the Instant Pot are sweetish or certainly include either sugar or honey. So I did some Googling. I had already defrosted a pork tenderloin so I hunted for recipes without sugar. I found two I liked. This is the one I actually cooked. Have you noticed that the finished result of your recipe never looks quite the same as the pictures!! 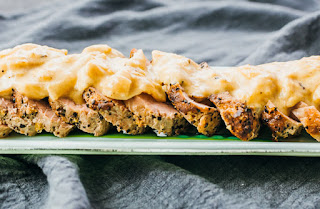 1. Cut the pork tenderloin in half so it’s half as long as before. If unseasoned, season all sides with salt and pepper.

2. Turn on the pressure cooker’s saute mode for medium heat. When the display reads HOT, add olive oil to coat the bottom of the pot. Add pork and cook until golden brown on one side, about 5 minutes. Flip to cook the other side for a few minutes. Transfer the pork to a plate.

3. Add onions and cook for a few minutes, stirring frequently. Turn off the saute mode.

4. Add water, stirring and briefly scraping up any brown bits stuck to the bottom of the pot. Return the pork to the pot, nestling it on top of the onions.

5. Secure and seal the lid. Cook at high pressure for 4 minutes, followed by a 10 minute natural release. Make sure to wait the full 10 minutes; do not open even if the pressure is completely released before 10 minutes have elapsed.

6. Uncover and insert a thermometer into the thickest part of the tenderloin -- it should read 140-145 F. Transfer the pork to a cutting board and let it rest, where it will continue cooking. Do not slice yet.

7. Turn on the saute mode. Add heavy cream and mustard to the pot, stirring together. Bring to a boil. Let the sauce boil for 8-10 minutes to thicken, stirring frequently. Turn off the saute mode and stir for a minute to let the boiling subside. Stir in parmesan cheese until melted.

8. Slice the pork into thin slices and serve onto plates. Pour the sauce on top.