Sorry about the unblog yesterday. I went to bed and slept really well and felt a lot better when I got up.

This afternoon we went bowling and although I didn't get a game as high as last week, I nevertheless had three good games and my average went up 3 points. Not that it is very high at the moment. Sadly next week is the last of the summer league and the team we joined were at the bottom of the league anyway, too late to do much about that now. Ah well, the new winter league will start in September - I am assuming on the 9th, a week after Labour Day. The Summer League will actually end on Aug. 14 when we will have the "banquet" - KFC.

It was incredible coming home, we had no errands to run for a change. Cannot imagine why. It has been a lovely day again without that killing humidity we had before. Miserable. Mind you I was freezing in the bowling alley. They really had the A/C turned up. Don't know why it was so high.

I had some strawberries left over so I looked on line for a berries and yoghurt recipe and ended up putting some honey on the berries and mixing more honey in the yoghurt (Skyr) and it was good. Easy too. Last night I made IP Sausage and Peppers so we had leftovers tonight. Must admit that is one of my favourites. I suppose I would get tired of it if I made it too often.

Unbelievable it's August already. Seems this year is flying by. Turns out that during August the grocery store PC Express programme is going to be free. Saves me $12 so I can't complain.

I seem to be collecting Hot and Sour Soup recipes. I do love a good one. This has slightly different (to me) ingredients. I have never actually made it for some unknown reason although I used to make a kind of botched version once. ladydog has made it she tells me. I really must get cracking and make it. Bet you can do it in my favourite Pot. 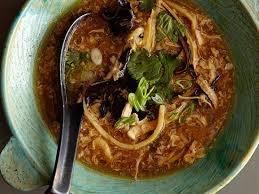 2. Meanwhile, in a large saucepan, bring the broth to a boil. Add the vinegar, soy sauce and salt. In a small bowl, whisk the cornstarch with 3 tablespoons of water, then add the mixture to the boiling broth, stirring constantly. Let the broth return to a simmer and cook until soup thickens, about 3 to 4 minutes.

3. Beat the eggs with a pinch of salt. Bring the soup to a full rolling boil, and using a circular motion, pour the beaten eggs into the soup. Wait 5 seconds, then turn off the heat and stir the pot to distribute the eggs throughout the soup.

5. Divide the soup among 4 bowls. Drizzle each with sesame oil and garnish with scallion and cilantro.