How about that, I bought a DVD - Pavarotti: A Voice for the Ages. Just went to play it tonight and discovered that I not only had a documentary which is basically what I bought, but a concert by Pavarotti which took place in Barcelona. Matt is busy watching, I am listening from another room. Well don't want to be late as Karen, our cleaner, comes at 8:30.

We went to Mandarin today, first time in a loooong time. Could have had a free meal yesterday as we are Canadian Citizens but can you imagine how crowded Mandarin restaurants were. Shudder. Actually it was a lot more crowded today than I think we had ever seen it. Mr. "I can't walk" walked all round the place without even using his cane. Even went twice to the dessert counters and they are a longish walk for me. By the way, I checked my email this afternoon and found that, as I have been on a panel for Mandarin for a while, they are thanking me with a free meal. Had to send for a letter though, they are not stupid, if they emailed me a free meal I could have printed it several times and done the rounds. Not that I would have, but..... Might say, I ate myself stupid although I actually stuck to fish mainly. They had mussels in a basil sauce on the salad bar and hot mussels in another sauce, they are huge, and I had quite a few of  them. They also had maple glazed salmon. Yummy. I don't understand Matt, he gets a plate with a few Chinese items, egg rolls and pork balls feature a lot. Then he gets two dinner plates of cookies or cakes which he can get anywhere!

Went to pick up some groceries afterwards. Couldn't get a driver today and they offered me one for tomorrow but busy so no can do. They are trying for Thursday and I will make up a bigger order if they can get one. They seem to be reducing their products, maybe because of the Starbucks. That is going to annoy me if I can't get what I want because of a damned café. Maybe the chain isn't  making enough money?

I made Devilled Eggs and Salad for supper and finished up the Pavlova. Much to my surprise the Pavlova was on the website. I didn't think they would be. The last batch of eggs I got were all, or mostly all, double yolkers and some of the shells turned out to be suspect, not broken but a tad weak I think with the result when I did hard boiled eggs in the IP a couple of them cracked. They were usable though.

Forgot to mention that I had ordered a collapsible cane for when I want to use my walker part of the time and a cane the other part. Matt unpacked it and got pinched. It came folded and turned out it snapped into its slots without any help from me and tore the skin on my thumb. There were no directions at all. I finally got it assembled then could not disassemble it. Matt could but I am not strong enough. Figure there is something wrong, but who knows what, we don't. My thumb bled profusely and is as sore as you know what. I am not a very happy camper. I wrote a bad review straight away. Hope somebody at Amazon  takes notice.

If you are interested, this is my recipe for Devilled Eggs. Devilled is supposed to be spicy, very spicy, so I invented this way of doing it, but tonight they didn't taste that spicy to me at all, I will have to add more of the mustard and hot sauce. They were still pretty good mind you. 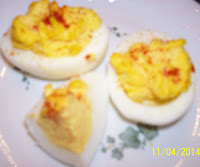 As a supper dish

Peel eggs and cut in half taking out the yolks and putting in a small bowl. Mash with a fork. Add mayonnaise and continue to stir then add all the other ingredients individually. Mashing in with each addition. Then put the resulting mixture back into the egg whites and sprinkle with paprika. This is very much a matter of taste.