I started the day reconciling bank accounts. Wasn't sure I could be bothered, but it is actually something I enjoy doing. Maybe I should have become an accountant or something. Too late now I guess, apart from which, I have always been bad with numbers. Only one teacher ever managed to get through to me about math and unfortunately my dad went bust and I was taken away from that school. Pity. However, that was a long time ago. Computers really helped me which is maybe why I got so involved with them right from the beginning even if a friend, working in the company computer department, assured me I would never be able to use them. Admittedly that was in the days before modern computers came out. In those days they printed on cards and tapes etc. and everything meant you had to be able to code.

After lunch I finally got round to making some pickles. I bought extra vinegar thinking we had run out and then discovered a whole container full which meant I had three large containers. So, I made two large jars of fridge pickles and three smaller jars. By that time I had had it so will do another jar tomorrow as I have brine left. Won't have room in the fridge for anything else now anyway LOL.

For supper we finally ate the rest of the stuffed peppers  I did a while ago when the peppers mostly split because they weren't too fresh. They are good though and I will be making some more in the not too distant future.

I was reading an email about recipes and thought this was an Instant Pot recipe. It isn't but I thought it sounded good anyway, so I will be trying it. Actually, I think, with a little thought, it would certainly work in the Instant Pot. 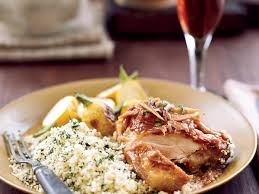 vinegar, tomato, shallots, garlic and a touch of honey into a perfectly balanced sauce for chicken.

1. In a medium saucepan, bring the vinegar, broth, honey and tomato paste to a boil, stirring well. Simmer the vinegar sauce until reduced to 1/2 cup, about 8 minutes.

2. Heat the butter in a large, heavy skillet. Season the chicken thighs with salt and pepper and add half of them to the skillet, skin side down. Cook over moderate heat, turning once, until browned. Transfer to a plate. Repeat with the remaining thighs.

3. Add the garlic and shallots to the skillet and cook over low heat for 5 minutes. Add the wine; boil until reduced to 1/4 cup. Add the vinegar sauce and bring to a simmer.

4. Return the chicken to the skillet, skin side up. Cover and simmer over low heat until cooked through, about 20 minutes. Transfer the chicken to plates.

5. Add the crème fraîche to the skillet and boil for 3 minutes. Add the tarragon and season with salt and pepper. Pour the sauce over the chicken and serve.