I am writing this on Saturday night. I have just watched the movie Ghandi which I had seen before a number of years ago. It made me ashamed to be British. Unfortunately it is not the only history which has had that affect on me. I was brought up to believe the British were lily white. Were we hell. We committed some dreadful atrocities all over the place. Not only that we were riddled with prejudice, although we didn't make a programme of killing those we despised. Anyway, I thoroughly enjoyed seeing the film again and ended up with tears in my eyes. Although I was only 9 when he was assassinated, I remember news pictures of Ghandi in England which surprises me. I don't remember much about it other than the pictures. A man of great courage and wisdom.

We both enjoyed our supper tonight, I bought a ham steak, something we haven't had for a while, I have no idea why. I basted it with a home made sauce and broiled it. It was good. I did a Pea Relish and the Meals on Wheels Carrot Salad together with some chunky fries cooked in the air fryer. Followed up by the chocolate wave cake from Red Lobster. I thought I would only eat part of the cake but before I knew it, there was nothing left. No ice cream of course, that is only in the restaurant. Their ice cream comes from a place in Peterborough, up north of here. I suggested we made a day trip (assuming we can get there and back in one day, might be longer) to Peterborough to visit the creamery that makes this delicious ice cream.

Turns out it is about 2 1/2 hours from here. Been up that way in the past but not for a long while. But it would be quite a nice day trip. This shows using a motorway, but I have a feeling it might be better to take lesser roads.

In case you are unfamiliar with this area, the lines going through the lakes are the borders between the US and Canada.

Got my bill from Community Support and could not figure out why I had two escorted shopping rides at $4 and one at $14. Was waiting til Monday to find out. I then remembered I had also used them to take me to Costco when I went, duuh.

There was a whole section on dishes made with tomatoes in my Food & Wine email. There were some delicious ones, but I picked this out as being somewhat unusual. A friend used to dredge green tomatoes slices in corn meal and then fry them, they were delicious.

Relishes typically contain cooked and pickled vegetables; the one here is mouth-tinglingly tangy. 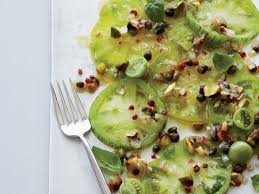 James Syhabout of Oakland, California's Commis makes it by pickling shallots, capers, pistachios and pink peppercorns overnight in Champagne vinegar and olive oil. It's awesome on tomatoes, but he also likes using it on fish

1. In a jar, combine the pistachios with the shallots, capers, vinegar, sugar, pink peppercorns and the 2 tablespoons of olive oil; season with sea salt. Refrigerate the relish overnight.

2. Arrange the tomato slices on plates. Drizzle lightly with olive oil and sprinkle with sea salt. Stir the relish and spoon it over the tomatoes. Garnish with basil leaves and serve.

Tips
The relish can be refrigerated for up to 3 days.