50 years ago this week, I was on my father's boat in Yugoslavia. On July 17th John (my first husband) and I had to leave to go back to England. We got into the cab and the first thing we were asked was did we have a TV on the boat. No, we didn't. On the cab radio they were broadcasting the moon walk, in English of course, but their local station was overriding it in the local language so we had difficulty hearing it but I remember the excitement we felt. Of course, when we got back to the UK we saw all the pictures on TV. Incredible that it was 50 years ago and nobody has tried to go back. The TV here has been inundated with programmes about going to the moon and one thing someone said at the time, we would put men on Mars before the end of the century. What a disappointment that is. Finally they are building a new rocket to go back to the moon.

Not had a lot of time to do anything with my new laptop yet. It is up and running but I haven't installed any external programmes on it, I am delighted with it though. It is a 14 inch Hewlett Packard Snowflake. Smaller than my previous laptop. I haven't had time to install much on it yet, probably have to work on it over the weekend.

Went bowling this afternoon, I was thrilled to bowl one 158 game which I haven't done since before I went into hospital. I foolishly hoped all three of my games would be the same, no such luck, but my scores weren't that bad. We were apparently bowling against the top team and ended up taking the first and last game from them. Not bad considering the other two members of the team are not all that interested in team standings.

Thursday ladydog is bringing subs for lunch and then we are going to clean silver. There's quite a lot of it, big job. She and Sue offered to "chop carrots" for me and I said doing the silver would be much more helpful LOL. Unfortunately Sue is a working girl so it's just ladydog and me.

Had to go into the grocery store on the way home as I hadn't received a couple of things on my order. The store is a total mess at the moment because they are building this Starbucks. I checked out the Produce Department too and was delighted to find Artichokes, haven't had any for ages, the store just hasn't been getting them. I splurged and bought four. I love those things.

I thought this recipe looked good although using Saffron is an expensive proposition.

Anoosh Shariat, the executive chef at Park Place on Main in Louisville, Kentucky, likes to use 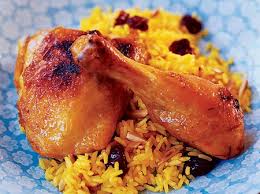 1. Preheat the oven to 375°. In a large bowl, combine the olive oil, onion, lemon juice, cumin and half of the saffron. Add the chicken, season with salt and pepper and turn to coat. Let the chicken stand at room temperature for 1 hour.

2. Drain the chicken, scraping off the onion and saffron and transfer it to a large metal roasting pan. Add 1/2 cup of water, cover with foil and bake for 20 minutes. Uncover and bake for 25 minutes longer, or until the chicken is cooked through.

3. Meanwhile, bring a large saucepan of salted water to a boil. Add the rice and cook until almost tender, about 10 minutes. Drain the rice in a colander and shake out any excess water. In a small bowl, dissolve the remaining saffron in 1 tablespoon of water. Return the rice to the saucepan and stir in the saffron water.