As an expat Brit, I was interested in this bit of trivia. The number of pubs in Britain peaked at 40,840 in 2002 and steadily decreased to 22,840 by 2018.  Particularly as the pub  was a mecca for us Brits at one time but appears not to be any more. It may be because drinking and driving has largely been wiped out. Matt and I never drink in restaurants any more but do our drinking at home. Mind you many pubs in the  UK are in walking distance of their patrons, maybe those are the ones which have survived. I would like to see a similar statistic on the fish and chip shops which were once a great staple of the British diet but which, I understand, have given way to Indian take outs.

As I sit here typing, I can hear fireworks popping off all around. Poor animals. Second night in a row too. Not only I am sorry for the dogs and cats etc. but for all the other wild animals who must be frightened to death by the noise. Yes, I know they are pretty, and I  used to enjoy them as much as the next person, but having seen at least one of my dogs terrified of the noise, it made me stop and think. 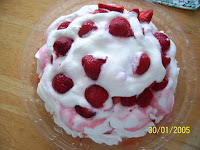 I made my first Pavlova of the summer this year. Strawberries. I prefer them with raspberries but local ones are not around yet. This picture is from 2005. I didn't realise I had been making them that long even if I cheat and don't make the meringue these days.

Went to the asparagus farm on Saturday and got my very last batch for this year. I have a stack of it frozen plus the pickled asparagus which I canned. Don't suppose it will last me mind you. A  year is a heck of a long time. Next thing is fresh corn. I have to buy it at the store as it isn't worth driving a long way for a couple of ears. Matt is not into corn unfortunately. Now ladydog and her husband are nutty about it.

I just watched The Big Heat, a 1953 movie. Funny to see Lee Marvin looking so young. I recognised Gloria Grahame too and couldn't think where from but traced it to Ado Annie in Oklahoma. She said some words in both movies which caused me to recognise her at the beginning. I enjoyed the movie - Glenn Ford was the lead.

I love Endive. I am not sure why it is known as Belgian Endive, but however it is known, it is great served like this.

Combine the goat cheese, milk, scallion, parsley, garlic, and walnuts in a bowl and beat with a spoon until smooth and creamy. Spoon or pipe the cheese mixture onto the individual endive leaves.