Went to Mandarin as I said, and had a great lunch. I indulged myself on chocolate bacon, delicious, and especially so today they seemed to have used much more chocolate. And no, I didn't make ladydog eat any. Matt had some and seemed to enjoy it. Because they are still celebrating Canada (all month long) they still had some maple glazed salmon which is delicious. They also had miniature tortières. which I make anyway, and Poutine which I wouldn't touch with a barge pole. I don't like gravy on fries in the first place and fries made soggy with anything turns me off. 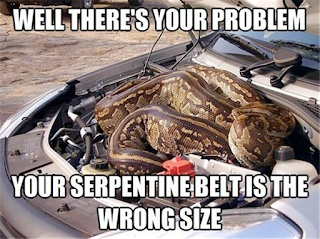 I do wonder if this is an actual picture. They just might curl up in a warm engine. Anyway, inside the card is the changed song. Think they'll get a kick out of it. Really looking forward to sitting there for an hour and a half, that's three times this week. Boh, the office manager, said I knew I enjoyed hanging out with him drinking coffee. Riiiight. I told him to be careful his wife didn't find out.  He is a fun guy.

I had ordered some lamb's kidneys from the Victoria St. Market and Thursday they had arrived. After  leaving the restaurant  we went straight to the garage. ladydog was also going to the Market so I phoned her to tell her where we had gone so she wouldn't be concerned at us not turning up. She picked up the kidneys for me. 12 kidneys for $8 - not bad. So, the following recipe is mostly for her. And for anyone else who likes lamb's kidney of course. We also just fry them in butter or bacon grease to have for breakfast but although Devilled are traditionally a breakfast dish, Matt and I eat them for supper as do many people I am sure. 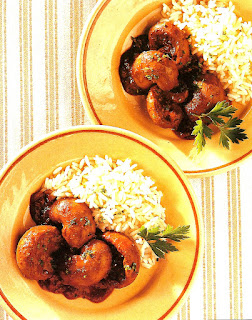 1. Mix the first 6 ingredients together (including salt and pepper) to make a sauce.

2. Melt the butter in a frying pan, add the chopped shallot and cook stirring occasionally, until it is softened but not coloured.

3. Stir the kidney halves into the shallots in the pan and cook  over medium high heat for about 3 mins on each side.

4. Pour the sauce over the kidneys and quickly stir so that they become evenly coated. Serve immediately sprinkled with fresh parsley.

Note: To remove the cores from the kidneys use sharp kitchen scissors rather than a knife. Much easier.

Author Notes
"Devilled" dishes are always hot and spicy. If you have time, mix the spicy ingrendients together in advance to give the flavours time to mingle.