Well, after several weeks I finally got to the Cannabis Lab. I was a bit teed, my appointment was for 2 and it must have been 2:30 when I got to see the doctor. Turns out I am taking it wrongly. He says I should split my daily dosage up during the day, not take it all at once. Will try that tomorrow. Different doctor, much nicer, he actually looked at me. I have to see them again in August. At least the weather shouldn't interfere then.

Afterwards, went to the Scottish Bakery, The Rising Dough, where I had ordered 5 Cornish Pasties,

had one left from when I was in hospital and Matt was heating them in the microwave. Must have been horrid, pastry needs to be crispy. Whilst I was  there, I fell for some individual Lemon Meringue Pies, some scones and some rum truffles. I actually hadn't bought the truffles but I had to use their bathroom and saw them on the way back. The pies were delicious, have one left for tomorrow. Decided to have a pasty for supper too. Easy peasy for me. Had a rum truffle later, yummy. If you're interested, I have linked to their page of products so you can drool over the things they make. I should do that instead of buying so much, they are not inexpensive.

I had placed a small order at my grocery store so stopped to pick that up and then forgot to go to the library - ordered some DVDs of Vera, an English cop show I like. When I got home discovered the mail man had been and hadn't been able to get one item in the mail box. Damn. Got a hospital visit tomorrow (Friday) so won't have time to go to the Post Office and/or the library. Funnily enough watched Vera Thursday night. Series 8 I believe, I have ordered 1 and 2.

How's this for a breakfast dish then? Don't think I mentioned before that I bought frozen avocado chunks from the store. They aren't bad, been adding them to salads, but they have a recipe for guacamole. Never made that although I have eaten it a few times.

Chef Ed Kenney uses both white and brown rices in this terrific bacon-studded dish that he serves at his casual Honolulu spot, Kaimuki Superette. “In Hawaii, we call it hapa rice; it’s more interesting 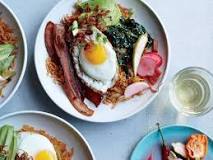 and flavorful than plain white rice,” he says. “In Hawaiian, hapa means ‘partial’ and is often used as a term of endearment to describe people of mixed ethnic backgrounds.”

1. In a large saucepan of salted boiling water, blanch the spinach until wilted, 1 to 2 minutes. Drain well and let cool slightly, then squeeze dry. In a medium bowl, toss the spinach with the sesame seeds and sesame oil. Season with salt.

2. In a very large skillet, cook the bacon over moderately high heat, turning, until crisp, about 5 minutes. Transfer to a paper towel–lined plate to drain. Pour off the fat from the skillet and heat 1/4 inch of canola oil. Add the shallots and cook over moderate heat, stirring, until golden and crisp, about 5 minutes. Using a slotted spoon, transfer the shallots to a paper towel–lined plate to drain.

3. In a bowl, toss the white and brown rices with the oyster sauce, soy sauce and Sriracha until well coated. In a wok or the wiped-out very large skillet, melt the butter. Add the onion and celery and cook over moderate heat until just starting to soften, about 2 minutes. Add the rice and stir-fry over high heat until hot, about 5 minutes. Stir in half of the scallions and season with salt and pepper; keep warm.

4. Heat a large nonstick skillet and brush with oil. Crack half of the eggs into the skillet and cook sunny side up, about 4 minutes. Transfer the eggs to a plate. Brush the skillet with oil and fry the remaining 3 eggs.

5. Spoon the fried rice into shallow bowls and top with the spinach, avocado, bacon, fried shallots, fried eggs and the remaining scallions. Serve with pickled vegetables.