Happy Valentine's Day to you all.

I am beginning to get fed up with hunting for Instapots. First I decide on a second hand one, then I figure it's not such a good idea and anyway, being from Amazon, returning would be more difficult. However, if I buy from Walmart, I can return it to the local store. So, although it is not the one I would prefer, I think that is definitely the one I am going to buy. Then I was sent to Instant Pot's online store which has the one I really want, with free shipping. No hassle return, but... have to pay for shipping if I returned it. Blow it, I'm going to bed.

They are saying the weather will still be pretty rough tomorrow. We shall see, but I have an appointment with the Cannabis Lab and I have been trying to get there for a while as you know. Also want to take the large Instapot back. I also have shopping to pick up tomorrow, so it had better be good weather. Or relatively good driving anyway. My cleaner did come today although this morning it was snowing and we were getting whiteouts because of the winds - the winds are still howling around our building I might add.

Just watched a fascinating programme on Nova about the future of rockets. Apparently there are now a lot of companies who are developing smaller cargo type rockets ( such as those supplying the space station as is done by SpaceX) but NASA is building a giant rocket to go into deep space. Cannot imagine what it is costing,  but the aim is to eventually use this rocket to colonize Mars etc. Oh I wish I was younger. Matt just doesn't understand why they are wasting their money, but Earth will be too full of people one of these days and we need to spread out. Just hope we have more sense with the places we colonize than we have had with our present home. Apparently the cost of a trip into space has already been reduced from multi millions of dollars down to around $5 million!! That sounds a familiar figure.

Thinking of smoked haddock and having some in the freezer, I remembered my father often cooked it for me for breakfast adding a poached egg. Delicious. Meant to do so this morning but we were a tad late getting going and the cleaner phoned to say she was on her way. Tomorrow hopefully.

I have always been one for making enough of anything to produce another  meal or two. This certainly fills the bill. Love the idea of the Chicken and Herb Crêpes.

Make a big batch of this juicy roast chicken and caramelized onions and you've got enough for three meals. Save the leftovers to make Thai Chicken Pizza the next night, and Chicken and Herb Crêpes 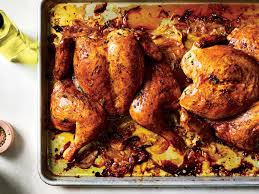