Today is Family Day in Ontario, most places shut down, even the bowling alley. There was a party in the family room here on Saturday. Obviously a family get together. This is a fairly new holiday. It first came into being in 2007. Before we lived in the States this holiday had been discussed, but nothing had been done about it. Pity, it would have been nice when I was working LOL Of course, in the US it is President's Day. Of course in both cases, not everyone gets a holiday, police, prison officers, firefighters, nurses, doctors and hospital staff, and so on and so on. No doubt they all get time in lieu but it isn't the same. I know in the prison service they used to split up the shifts at Christmas so nobody had to work the whole time.

We never go out on a Saturday, but we did last Saturday. I mainly wanted to get the large Instapot back to Walmarts. Their computer was giving them trouble (how unusual for a computer) so I asked and the young man in Customer Service got me a chair. Very nice of him. Unfortunately, Walmart doesn't have the Instapot I want. Kohls do. We then went to the liquor store and bought up the place. Horrors, they were out of  my Fizz. Well  they had the pink stuff which I don't like as much. However, they did have the same make in a larger bottle which is about 2 glasses worth. There are much bigger bottles of course, but I don't want to be paralytic!! They had a taster there with Folonari Valpolicella. I didn't taste as I know what it's like but had forgotten about it so grabbed a bottle. We actually drank it on Saturday night, enjoyable wine.

As you know, I shop online. I must admit I am getting a tad fed up with their IT department, an item is there one minute and disappears the next. Several times I have phoned my store to ask if they have the item and they do. I have written to complain but I don't suppose it will make any difference. Another thing I am teed off about, they have fired the manager of our store. The usual deal, as far as I can make our, they want to replace him with someone younger. I cannot imagine why, he isn't that old and he does an extremely good job. Funnily enough, our driver on Friday, used to work at our grocery and retired 3 years ago. We were talking about the manager's firing. He knows him and said he was quite shocked at the news, had no indication whatsoever. I complained about that too but I don't suppose it will make any difference. This seems to happen to a lot of people, they fire the older, experienced people and replace them with younger, cheaper salaried, employees. Happened to our son-in-law too. Generally it is difficult for people in this age bracket to find another job although after 2 years, sinlaw has done so and our driver seemed to think the store manager would have no trouble getting another job in retail. I hope not. The driver hadn't got much good to say about the owners of the stores. Big company.

One sees recipes all over the place for roasted Brussels Sprouts, Broccoli, etc. so, Sunday night I

decided to cook broccoli in the air fryer, looked up a recipe, tossed florets in olive oil and sprinkled with onion powder. Cook for 10 mins at 300°F tossing at least once. Matt did not like it but I didn't think they were bad at all. Ate his too. They did need a bit of salt. So, I guess that's the end of that. Not cooking 2 different ways. I cook broccoli in distilled water anyway, it tastes better. Do Brussels the same way. I find the water softener causes it to taste funny although Matt doesn't seem to mind.

I thought this was different and you never know, despite not being good with pastry, I  might give it a go. I might also use store bought pastry (surely not).

Potato And Egg Pie With Bacon And Crème Fraîche

This pie makes a simple, elegant, and satisfying weekend lunch paired with a chilled bottle of Alsace 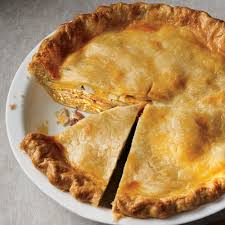 wine and a green salad. In a pinch, use a store-bought pie crust.

1. Stir together flour, butter, and 3/4 teaspoon salt in a large bowl. Using your fingertips, rub butter into flour mixture until mixture resembles coarse meal. Make a well in center. Stir together 1 egg yolk with enough ice water to equal 1/4 cup; pour into well, and stir into flour mixture until just moistened. Turn dough out onto a lightly floured surface. Knead dough just until it comes together. Divide dough into 2 disks. Wrap each disk in plastic wrap, and chill at least 8 hours or overnight.

4. Arrange half of potato slices in refrigerated pie shell, overlapping slices. Sprinkle evenly with bacon; top with remaining potato slices, overlapping slices. Spread crème fraîche over potatoes, and arrange egg slices on top. Unwrap remaining dough disk, and roll into a 10-inch round on a lightly floured surface. Place round on top of pie. Trim edges and fold dough under. Crimp edge as desired. Using the tip of a knife, prick top of pie twice.

Author Notes
In 2018, Food & Wine named this recipe one of our 40 best: In February 1979, Paula Wolfert penned an article about great Alsatian chefs cooking their mothers’ food. Included was André Soltner, then the chef at the legendary Lutèce in Manhattan. Soltner opted to recreate his mother’s outstanding potato pie, which Wolfert said was “a simple thing, yet elegant.” It consisted of a flaky pâte brisée filled with thinly sliced potatoes, bacon, hard-cooked eggs, herbs, and crème fraîche. Wolfert noted how strongly Soltner felt while preparing the tart, with “pleasure and nostalgia plainly visible on his face.” The secret to the flaky pâte brisée is the single turn made with the dough in step 2. This is home cooking at its best, from one of America’s most revered French chefs. Soltner described the food of his native alsace as based on ”very good dry white wines and wonderful regional produce.” This pie makes a simple, elegant, and satisfying weekend lunch paired with a chilled bottle of alsace wine and a green salad. In a pinch, use a store-bought pie crust.