Meant to go bowling this afternoon but I have had headache most of the day so just didn't feel up to it. Hopefully tomorrow and maybe Thursday as well.

Sitting here I have a pop up for Instant Pot Ribs. However, Matt does not like anything with bones in, so that's out, sadly. I love ribs. Could do them for myself one day I guess. Me I love chewing on bones. Apparently you can start your ribs in the Instant Pot and then barbecue them. Not that I have a barbecue anyway. Not allowed.

I think I may have mentioned it before, but my parents took me (or they hadn't anywhere to leave me) to a Britain Can Make it Exhibition. This was in 1956 before a lot of you were born. It was there that the pressure cooker was first introduced to English cooks. One of those things which stick in one's mine. They also had a robot which answered questions, yeah right! I assume they had a mike attached to it or something. The other thing that stayed in my mind was the shot tower. I was fascinated. Apparently that's how bullets used to be made by dropping hot metal (lead I think) down a tall tower - this is what it says online "A shot tower is a tower designed for the production of small diameter shot balls by freefall of molten lead, which is then caught in a water basin. The shot is primarily used for projectiles in shotguns, and also for ballast, radiation shielding and other applications where small lead balls are useful." I don't know why that stuck in my head for so long. Must have impressed me.

My friend Jan (ladydog) linked me to a chicken recipe she was making that day. However, I didn't have all the ingredients - what really staggers me, I don't have Herbes de Provence. I was sure I had some that I made. Oh well, future project. I had already thought about doing Kung Pao Chicken so then thought I would Google for an Instant Pot version (surprise, surprise). I found the following one but made a few alterations as I didn't have a couple of things. The dish was delicious but the snow peas and bell peppers didn't need quite so long - maybe 2 minutes on high. However, I was delighted with the result. 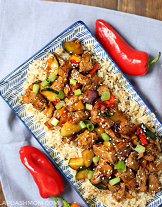 3. While that is cooking, cut your zucchini, onion, green onions, and peppers.

4. Vent your cooker, then add in vegetables plus some of your sesame seeds. Seal and cook another 4 minutes on high.

5. Sprinkle with sesame seeds and serve over a bed of cooked brown rice.