Wednesday afternoon, went bowling. Actually, I didn't really want to go. But, we did and I'm glad we did. Have to bowl slowly (between turns) to give my legs a rest but it wasn't too bad today. Except for the fact that Matt thrashed me in the second game. Grrrrr. They were having a pot luck there with lots of goodies and one of the owner's wives came over and brought a whole lot of chocolaty cookies which yours truly hasn't got the willpower to refuse these days. Later we had mini donuts too. Just what I need. Much later I was as stiff as a board from unusual activity. Ouch. 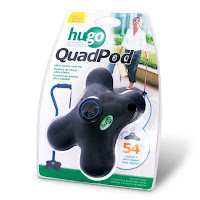 I bought an add on for Matt's cane which he refuses to use, so I am. Unless you have ever used one, you won't really know that canes are a bloody nuisance. Always a problem, where to put them and they are always falling on the floor, Matt's cane is worse 'cos you can't hang it. I put it on my cane but didn't get it right so it fell off before I left. Eventually I figured it out, and now it is firmly on my cane. One uses an allen key (provided) but I had forgotten you could use them either way up so I was making lots of difficulties for myself. My cane is now standing quietly in my computer room, next to my walker LOL. Unless I have to do a lot of walking, I leave the rollator at home and take  the cane.

Been spending a lot on odds and ends at Walmart etc. Now about to order a lifter for hot canning jars. Need it once asparagus comes in because I pickle it properly and seal in a water bath. I've also been buying underwear. I have some pretty old stuff at home so they needed replacements. I have said for years that they needed a mid size between 10 and 8. Now they do, a 9. Perfect fit. Mind you, I've got to stop pigging out or they won't fit me either.

Thursday, some time, my Instant Pot arrives, weather permitting. Supposed to get freezing rain Wednesday evening. My mistake, just checked, supposed to be being shipped Thursday, duuh. Have received the shipping email but don't know it's estimated arrival time.

Just been watching Nature and Nova on PBS. It was all about volcanoes. Naples was one of the towns they featured and all the precautions they are taking to predict the next eruption. I think people who live in such an area are absolutely nuts. They say it could be another Pompeii or even worse. Move now, don't wait for an evacuation through tiny restricted streets and crowded housing areas. I don't understand why people live in such areas.

I have just read that Sweet Potatoes are good for preventing muscle cramps. So I have ordered one. Matt won't eat them, but I think I will as I am prone to cramps. I know you all know more about sweet potatoes as I never cook them. When we first came to Canada in '75 a colleague of Matt's invited us home for dinner. His wife cooked sweet potatoes and Matt enjoyed them. They were baked. So I baked some and he decided he didn't like them so I have never cooked them since. I will now. In fact, from what I have learned over the years, you can more or less treat them the same as ordinary baked potatoes and stuff them with a variety of things.

Baked sweet potatoes are terrific with just a little butter and seasoning. Purists will love this recipe but if you need a little something extra, try sprinkling brown sugar or ground cinnamon over the top 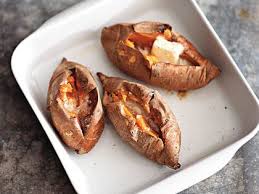 for a finishing touch.

2. Pierce each sweet potato several times with the tines of a fork. Place the sweet potatoes on a rimmed baking sheet lined with foil. Bake until tender, about 45 minutes.

3. Make a slit in the top of each sweet potato. Top with 1 tablespoon of butter and season with the salt and pepper.

4. Variation: Baking sweet potatoes intensifies their sweetness, making them surprisingly satisfying with little, if any, embellishment. If you crave something over the top, try some maple syrup or brown sugar, a spoonful of sour cream, a pinch of ground cinnamon, some caramelized onions, a handful of pecans or walnuts, jarred applesauce or chutney, canned chipotles in adobo, crystallized ginger, or grated orange zest