Phew, busy day. After dropping off the monitor we stopped for gas on the way to the restaurant and paid $1.24 a litre, expensive, then I was totally annoyed that when we came back a few hours later, the same gas bar was charging $1.18 (I'm rounding up).i.e. 6 cents less. Grrr.

Had a very enjoyable lunch with our friend whom we haven't seen for a while. Then dropped into Costco and bought some chicken breasts and pork loins. I really like the meat there. I just wish I could pay with my Visa. Apparently these days they will accept Master Card but we don't have one and are unlikely to get one. One credit card is enough thank you. Talking of that, we get cash back every November. The cashback disappeared last Friday from our information on line and should have been deposited into our account.  No sign of it to date. I phoned them and they said it was on my next statement but I would not see it on line because I wasn't paperless (still get statements 'cos Matt can't use a computer). He said I would see it on the statement next week. What nonsense. If it didn't show up on line, my online accounts would be inaccurate. Another Grrrr. 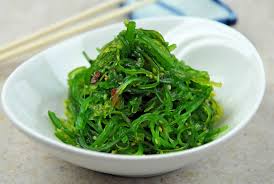 After Costco I realised I had forgotten the shopping list so we had to go home and get it. Another grrrr. Although it did mean I could put the meat in the fridge. Headed to the grocers and bought up the store. I discovered they were now selling Kinchi so, of course I had to buy some to try. Hope it's good.  Didn't mention that I had some kelp salad at lunch (had it once before) and I loved it. Wondered if I could buy it round here and discovered I could at a Vietnamese store which I have been to a few times in the past. It really is delicious. Of course I don't know what is in the salad at the Mandarin. Looking on line, looks like it might be cooked and then dressed with a sweet and spicy sauce.  From what I am reading Kelp is the new Kale. Must say I like it better. Will have to look up some recipes.

Having been told that Eastern foods and spices are enabling them to fight off any kind of dementia problems, I am endeavouring to add more things like turmeric and cumin to the foods we eat. This soup fits the bill. I used to boil chickens like this to make stock anyway using the meat from the chicken to turn it into something else. I have always loved Chicken Noodle Soups. They don't say how many scallions but I would think 4 or 5 would suffice.

Chicken noodle soup never gets old. If you don’t have udon for this recipe, use rice noodles or regular old spaghetti. A small knob of fresh turmeric can replace the dried type. 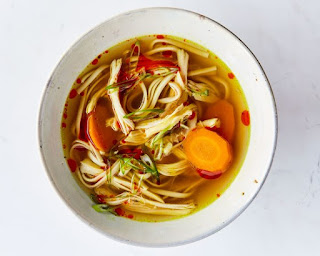 1. Place chicken, onions, garlic, ginger, bay leaves, turmeric, peppercorns, coriander seeds, and several pinches of salt in a large pot. Pour in cold water to cover and bring to a boil over medium heat. Reduce heat and gently simmer until an instant-read thermometer inserted into the thickest part of breast registers 155°, 30–35 minutes. Transfer chicken to a plate and let cool slightly; keep stock simmering. Remove skin from chicken; discard. Pull meat from bones and shred into bite-size pieces; set aside. Return bones and carcass to stock. Increase heat and bring stock to a boil; cook until reduced by about one-third, 15–20 minutes. Season with more salt if needed.

2. Strain stock into a large saucepan; discard solids. Add carrots, bring to a simmer, and cook until carrots are tender, about 5 minutes.

4. Divide noodles among bowls. Add shredded chicken meat to stock and cook just until heated through; season stock with more salt if needed. Ladle over noodles. Top soup with scallions and drizzle with chili oil.