Went bowling today of course, Bowled reasonably well but Matt bowled very well so he thrashed me today. He was happy of course. I am still not 100% but getting close to it. I read and was recommended to have some Chicken Noodle Soup so we did, for supper plus a sausage on a bun. Not really up to doing a lot at the moment.

No further news on our balcony as it rained all day. Not really hard, but continuous so I guess that was it. However, we passed all these road works and they were all hard at it, or at least at it, not sure about hard LOL.

All kinds of forms to be signed at the moment and witnessed by someone such as a bank official so will have to do that tomorrow. Have to prove Matt is still alive and kicking to get his pension. They do this every now and again. Pain in the you know what. 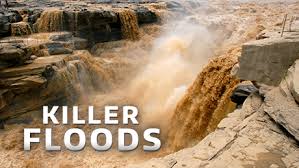 Last night we watched a programme on PBS about ancient catastrophic floods which  carved areas of rock during the ice age. The floods did thir carving in a matter of hours and were excessively fast  and powerful  as well as around 800 ft. high. If you follow the link there is a video. This is the programme description:


All over the world, scientists are discovering traces of ancient floods on a scale that dwarfs even the most severe flood disasters of recent times. What triggered these cataclysmic floods, and could they strike again? In the Channeled Scablands of Washington State, the level prairie gives way to bizarre, gargantuan rock formations: house sized boulders seemingly dropped from the sky, a cliff carved by a waterfall twice the height of Niagara, and potholes large enough to swallow cars. Like forensic detenctives at a crime scene, geologists study these strange features and reconstruct catastrophic Ice Age floods more powerful that all the world's top ten rivers combined. NOVA follows their efforts to uncover the geologic fingerprints of other colossal megafloods in Iceland and, improbably, on the seabed of the English Channel. There, another deluge smashed thorugh a land bridge connecting Britain and France hundreds of thousands of years ago and turned Britain into an island for the first time. These great disasters ripped thorugh terrain and transformed continents in a matter of hours - and similar forces reawakened by climate chage are posing an active threat to mountain communities throughout the world today.


This is not the usual sort of recipe, but it looked so delicious I thought I would pass it on. 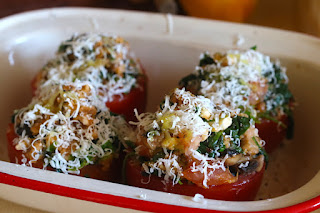 1. In a large frying pan, saute one onion chopped fine and a clover or two of garlic, minced, in a little olive oil and butter over medium heat.

2. Cut the tops off your tomatoes, use a knife to run around the ribs and turn the contents out into a bowl. Salt the insides of the tomatoes a tad and turn them upside down to drain.

3. Chop the tomato innards and add to the onion and garlic with 4 medium mushrooms, diced, about a quarter of a lemon, zested (and the juice of about half), a cup of breadcrumbs, a handful of chopped parsley, some crumbled feta or goat cheese, and plenty of salt and pepper. We did chilli flakes, too, because they are a staple.

4. Saute for a bit until everything is golden and the breadcrumbs and veggies have absorbed the tomatoey lemon goodness.

5. Stuff the tomato shells with the mixture, drizzle with olive oil, sprinkle with flaky sea salt, and top with grated parmesan-style cheese.

6. Bake in a hot oven 20 minutes or so until everything is cooked through, the tomatoes are soft and rich, and everything smells like you want to eat it RIGHT NOW.

Tips
Have a think too about what you've got in your fridge or pantry that would jazz them up a bit, or if you're just looking to use it up so it won't go to waste. You might prefer a lighter filling if these are for a side dish, but as they were the main for us I made them a bit heartier with the addition of mushrooms - swiss browns, if you can get 'em